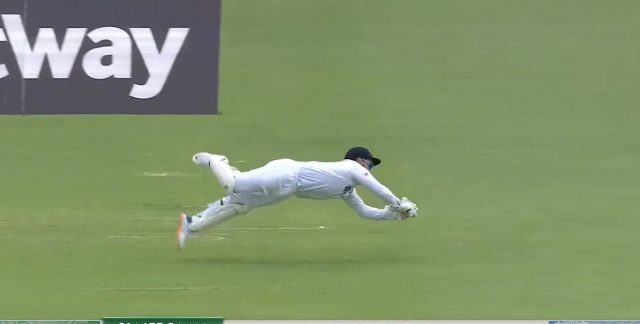 Team India wicket-keeper Rishabh Pant plucked onto a stunning catch jumping to his left to dismiss Temba Bavuma on day 2 of the 2nd Test in Johannesburg. With this, Shardul Thakur registered his maiden five-wicket haul in international cricket.

Bavuma was once again at South Africa’s rescue after a couple of wickets in a cluster at the stroke of lunch. He showed enough grit and determination to reach the half-century before producing a rough shot, which was grabbed by Rishabh Pant behind the stumps.

It was a pre-meditated shuffle from Temba Bavuma that allowed Shardul to go short and down leg. The Proteas batter tried to flick it fine, but he ended up getting strangled down the leg and got thick inside edge on the flick. Rishabh Pant dived across to his left and comes up with a smart catch.

The TV umpires had a look at the dismissal before Kagiso Rabada walked out in the middle only to return after facing six deliveries.

India bounce back after early resistance

The visiting side has made a resounding comeback riding on Shardul Thakur’s five-wicket haul after Dean Elgar and Keegan Petersen kept the Indian bowlers at bay for the most part of the first session of day 2.

South Africa regained control in the second session with Temba Bavuma and Kyle Verreynne looking in absolute control. The former was positive and the latter dropped anchor with the ball getting soft, India were unable to create any real chances, that’s until Shardul Thakur came back for another spell. The golden arm struck, trapping Verreynne in front and then removed Bavuma, one ball after getting to his fifty.