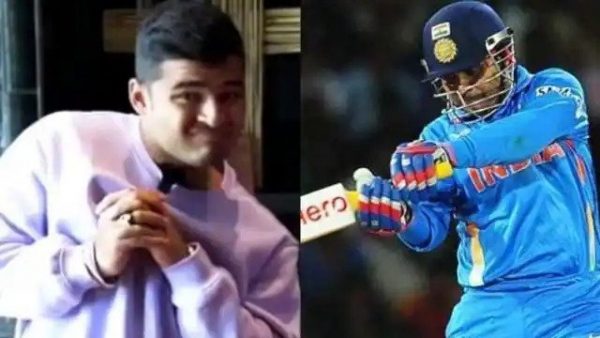 Youngster Riyan Parag is known for his antics both on and off the field, which attract eyeballs on social media. From his Bihu dance after winning a game for Rajasthan Royals, to his selfies with teammate Rahul Tewatia, fans enjoy his posts on his handle. He looks like the guy who helps to keep the load off in the dressing room.

This time he has immaculately emulated former India opener Virender Sehwag’s expressions while batting. Riyan Parag did it while engaging in a funny game with his fellow teammate Shreyas Gopal. They were playing a game where Shreyas Gopal had to guess the name of the player, and Riyan was acting without uttering a word.

Riyan Parag finely mimicked Sehwag’s expressions. But Shreyas took a few attempts but failed to guess the name. Then Parag imitated the was Sehwag used to hit fours, and this time around, the leggie got the name right. Rajasthan Royals posted the video on their social media handle, and the video left the fans in splits. RR also tagged Virender Sehwag in the video.

However, Riyan Parag is not having his best time in the Indian Premier League (IPL) 2021. Despite playing all six games for Rajasthan Royals, he has garnered only 63 runs at an average of 15.75. Coming to his bowling, he has managed a solitary wicket. He might be looking forward to improving his game in the upcoming days.

Rajasthan Royals will square off SunRisers Hyderabad in their next game at the Arun Jaitley Stadium in New Delhi. Both the teams will play their seventh game. Both the teams are stumbling to mark their presence. SunRisers changed their captain, handed over the baton to Kane Williamson. For RR, the side is battered by injuries and foreign players pulling out. They are now without the service of Ben Stokes, Jofra Archer, Liam Livingstone, and Andrew Tye.