The Rajasthan Royals on Monday lost their fourth match of the Indian Premier League (IPL) 2022 season at the Wankhede Stadium against the Kolkata Knight Riders. They failed to defend 152 runs in the second innings, as Kolkata won the match by seven wickets.

During the course of the match, the fans witnessed an unusual incident. Rajasthan Royals skipper Sanju Samson protested a wide call by the umpire, by signaling a DRS call. In the penultimate over of the match, the umpire Nitin Pandit called multiple wide ball calls which were debatable.

On the fourth ball, when Nitin Pandit signaled wide, a frustrated Sanju Samson protested the decision. He signaled for a DRS call, to review the umpire’s wide decision to express his disappointment.

The drama did not end there, as again on the last ball of the over, the umpire signaled a wide call. Nitish Rana tried to ramp into the leg-side, and Prasidh Krishna bowled following the batter. The ball missed Rana’s bat by a whisker, however, the umpire ruled it as a wide call. This irked Samson again, who expressed his frustration with the umpire.

Rajasthan Royals lose their fourth match of the season 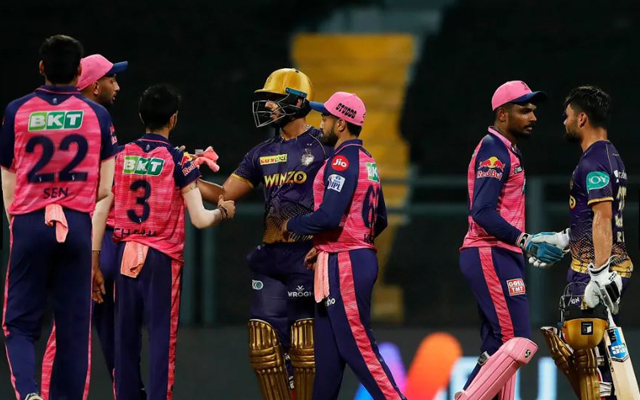 The Rajasthan Royals lost their second consecutive match of the season on Monday. Rinku Singh and Nitish Rana powered the Kolkata Knight Riders to a seven wickets win over the Royals at the Wankhede Stadium.

Kolkata Knight Riders chased down 153 runs in the final over of the match. Nitish Rana remained unbeaten on 48 runs off 37 balls, including three boundaries and two sixes. However, Rinku Singh was the main performer, slamming an unbeaten 42, with six boundaries and a six. He was awarded the Player of the Match for his performance.

For the Rajasthan Royals, Trent Boult was the pick of the bowlers with 1/25 in four overs. Earlier in the match, Rajasthan Royals skipper Sanju Samson scored 54 runs, to take his team to 152 runs in 20 overs. The Royals are third on the points table with 12 points. They will take on the Punjab Kings next on May 7 at the Wankhede Stadium.