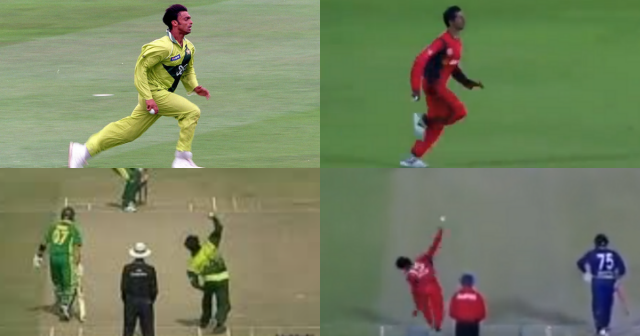 A video clip of a youngster replicating Shoaib Akhtar’s bowling action has lately gone viral on the internet. The name of the young bowler is Imran Muhammad, and the video is from an Oman D20 League match between Azaiba XI and Darsait Titans.

Imran’s bowling action is extremely similar to that of Shoaib. The long run-up, delivery technique, and even the flying hair all have a Shoaib Akhtar vibe to them. His action, like Shoaib’s, enables him to bowl through the shoulder, allowing him to throw the ball with all of the momentum gathered during the long runup.

“I hope he has aggression as well, like Shoaib Akhtar”, the commentator on-air said in the video. If young Imran is able to match Akhtar’s pace in future, it might be a quality that propels him to the top of the cricketing world.

It’s worth noting that during the Cricket World Cup 2003, Shoaib Akhtar bowled the fastest delivery in international cricket. At Cape Town, the Pakistani fast bowler recorded the speed of 161.3 km/hr versus England.

Shoaib Akhtar to be a part of Legends League Cricket

Shoaib Akhtar, meanwhile is ready to make a comeback on the cricket pitch in the first edition of Legends League Cricket. Former Pakistan pacer will join the Asian Lions squad. Sanath Jayasuriya, Shahid Afridi, Upul Tharanga, Muttiah Muralitharan and Tillakaratne Dilshan will be the teammates of Shoaib.

The tournament will begin on January 20th and will last for nine days.