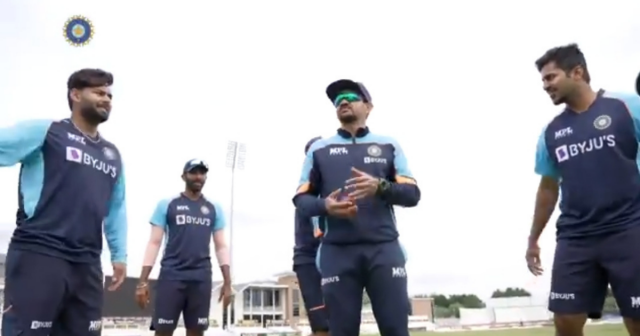 Indian cricketers were seen training together at the Durham Cricket Club to prepare for the five-match Test series against England. The India vs England series is all set to start from August 4 in Nottingham. In the meantime, with only a few days left team India is training hard to get ready for the event. Meanwhile, to get warmed up Team India was seen performing a fun drill in Durham.

The Board of Control for Cricket in India (BCCI)  uploaded a video on Twitter with the caption:

🎥 Sample that for a fun drill session to get the side charged up! 👌 👌

🎥 Sample that for a fun drill session to get the side charged up! 👌 👌#TeamIndia #ENGvIND pic.twitter.com/0jUyaeWe6b

In the video, the cricketer was divided into two teams. Notably, Rishabh Pant was the leader of one side and Shardul Thakur was the leader of the second team. They were allowed to select players in their team one by one.

The rules of the game stated a player has to catch the ball from one hand and throw it from his other hand. During that period if a player gets touched he will be declared out. Also, the team had to have 7 passes and the ball had to stop in the middle of the circle. All the cricketers were seen enjoying the fun drill.

Meanwhile, Team India will be looking forward to giving their best performance in the England Test series. Virat Kohli led side will be looking to gain some confidence back after losing the WTC final against New Zealand at Southampton.

#TeamIndia back at it and having a centre wicket training at Durham Cricket Club ahead of the five-match Test series against England.#ENGvIND pic.twitter.com/Y71qe4b4mo