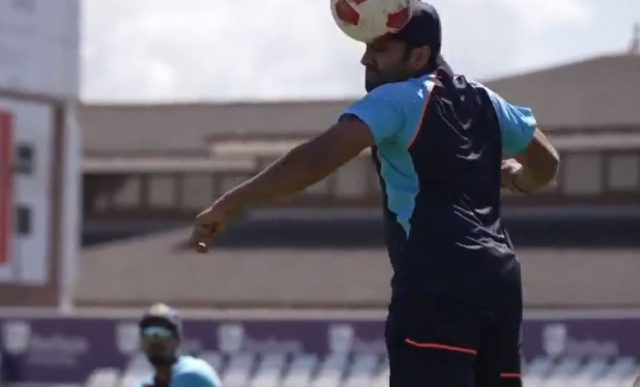 Ahead of their 3-day tour game in Durham, Team India began its training sessions on July 16 in Durham. They kicked off the camp with strength and mobility drills prior to the practice game against County Select XI.

In the video released by the BCCI, the experienced members Virat Kohli, Rohit Sharma and Ajinkya Rahane were breaking a sweat in the sun. They started things off with warm-up jogs and runs before switching over to a game of footvolley. There were a couple of fielding drills as well to end the proceedings for the day.

A funny moment was captured when skipper Kohli and Ravindra Jadeja imitated the header of a team-mate which sent the former crashing to the ground in laughter. Also seen was a blooper of Prasidh Krishna, who is part of the squad as a net bowler. At the end, clips of fielding coach, R. Sridhar’s birthday celebrations were included.

Rishabh Pant did not travel with Team India to Durham

Rishabh Pant is isolating after testing positive for covid-19. He is doing the same at an acquaintance’s place and didn’t travel for the training sessions with Team India in Durham. Luckily for Team India, no other player has tested positive. Wriddhiman Saha is also undergoing quarantine on being advised. He was deemed to be in close contact with throw-down specialist Dayanand Garani, who tested positive as well. They are currently unavailable for selection as a result.

After Pant tested positive, he was chided for attending the Euro 2020 game which possibly resulted in his current predicament. BCCI president Sourav Ganguly however, defended the maverick wicket-keeper.

“We have seen Euro Championship and Wimbledon in England. Rules have changed with the crowd being allowed inside venues. They were on leave and it’s physically impossible to wear mask all the time,” Ganguly told News18.