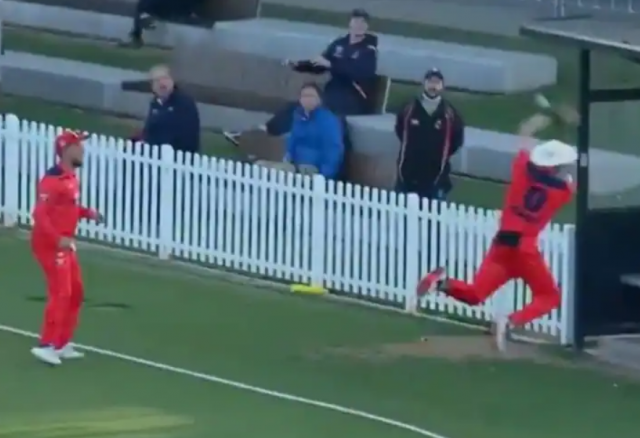 In a bizarre viral video that has been making the rounds, three players came together to spill a catch in the Marsh Cup tournament in Australia. The match was being played between South Australia and Queensland which saw some strange cricket being played. During the match, three fielders of South Australia, including skipper Travis Head tried their best to complete a catch near the boundary rope.

The incident took place on the fifth ball of the 36th over of Queensland’s innings. Michael Neser hit a shot at deep square leg off Brendan Doggett’s delivery. Three South Australia fielders tried to take the catch at the boundary line but failed.

The replays also confirmed that one of the fielder’s feet had touched the boundary rope and hence the umpires ruled it a six.

Meanwhile, Travis Head created a record for himself in the tournament hitting a double century. He played an innings of 230 runs off 127 balls. The star batsman scored a double ton in just 114 balls. His innings took South Australia to 391 runs in 48 overs. Travis Head is not a part of the Australian squad which was announced for the T20 World Cup. The southpaw brings an element of off-spin apart from his ferocious batting. He played his last game for Australia in 2018 in white-ball cricket. His last Tets match was against Australia in the Border-Gavaskar series.