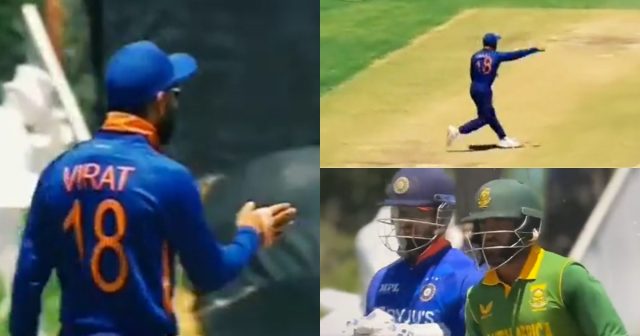 Former India captain Virat Kohli was seen having a heated exchange with South Africa skipper Temba Bavuma during the 1st ODI at Boland Park in Paarl. Opting to bat first, the host posted 296 runs on the board riding on centuries from Bavuma and Rassie van der Dussen.

After a slow start from South Africa in the first 15 overs, where they lost three batsmen to reel at 68/3, the hosts revived extremely well to post a daunting total on the scoreboard. Bavuma and Dussen batted exceedingly well but it was an exchange between Virat Kohli and Temba Bavuma that stole the show.

The incident took place in the 35th over of the match, when the Proteas tapped one at the cover off Yuzvendra Chahal. A fierce throw from Virat Kohli also caught Temba Bavuma, who manages to bend away from the throw just in time.

The ever silent Proteas captain was heard throwing some words at Kohli, who snapped back at the former. Virat Kohli, who is known to keep his emotions on his sleeves, looked quite aggressive in his body language.

The home side were struggling at 68/3 when Aiden Markram was run-out but then a record 4th wicket partnership for South Africa against India in ODIs – 204- has propelled the score to a very good one on a slow pitch.

While Temba Bavuma was the anchor, van der Dussen took on the mantle of finishing it off aggressively. India employed only the 5 bowlers and Shardul Thakur was expensive going over 7 runs per over while the spinners went for over 100 runs in their 20 overs. KL Rahul didn’t use all-rounder Venkatesh Iyer that will raise a couple of eyebrows.