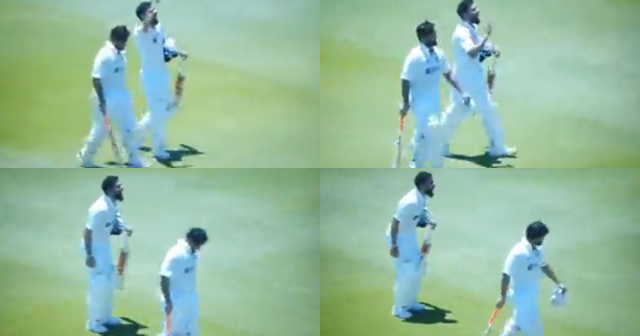 Team India’s Test skipper Virat Kohli was spotted waving hands at his daughter Vamika who was present in the stands at Newlands Cricket stadium after the first session of Day 3 on his way back to the dressing room for lunch. For the South Africa tour, Kohli has been accompanied by his wife Anushka Sharma and their daughter.

This cute gesture from Virat Kohli has gone viral on social media. The ongoing test match began on January 11th, 2022, which was also Vamika’s first birthday. In the video, Virat can be seen first saying ‘Hi’ to Vamika and then doing some funny actions to make her laugh.

Virat walking with his son and saying Hi to his daughter 🥺pic.twitter.com/BcmJzTVR3E

Virat Kohli’s resolute 79-run effort in the first innings of the 3rd Test in Cape Town has received praise from former India opener Gautam Gambhir. Kohli, according to Gambhir, left his ego in the kit bag during the knock. This was one of the slowest knocks played by the Indian skipper in Test cricket.

“Virat has said many times that when you go to England, you should leave behind your ego in India. Today, Virat Kohli left behind his ego in the kit bag and this knock reminds me of his very successful tour of England (2018)”, Gautam said on Star Sports.

Kohli left 57.4 % of the deliveries in his patient 79-run innings. This must surely rank among the best knocks Virat has played in his career. With this innings, Kohli also became the second-highest run-scorer in Test Cricket for India in South Africa. However, the century drought for Kohli still remains and fans would be hoping to see the 71st hundred soon from the 33-year old, after this incredible knock.