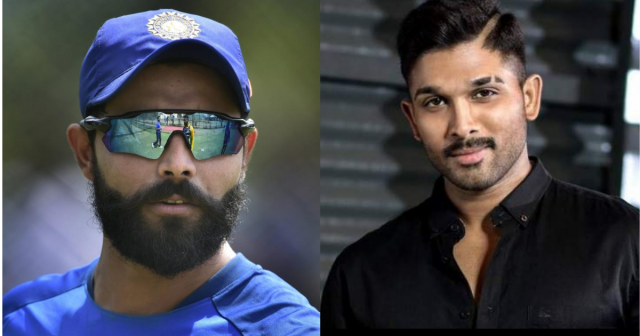 Indian All-rounder Ravindra Jadeja recently shared a picture of himself on social media in which he replicated the rugged look of Telugu films actor Allu Arjun from his recently released movie- “Pushpa: The Rise”. The photo has gone viral and Jadeja is receiving a lot of love from the internet world.

Even Allu Arjun himself reacted to Ravindra Jadeja’s post on Twitter. The actor wrote “Thaggede Le !”, which is the iconic dialogue used by him in the movie.

In the picture, Jadeja also had a ‘beedi’ in his mouth. He clarified in the caption of the post that the picture is photoshopped and he is not at all a supporter of beedi, cigarette smoking or tobacco.

“Smoking and consumption of tobacco is injurious to health. I do not endorse any form of smoking and the beedi used in the image is for graphic purposes only”, Jadeja wrote.

Previously, Ravindra Jadeja had posted an Instagram reel lip-syncing a popular scene from the movie.

Ravindra Jadeja recovering from an injury

Ravindra Jadeja last featured in the Kanpur Test against New Zealand in November 2021. During the game, the 33-year-old sustained a right forearm injury. He was diagnosed with a swelling on his forearm after undergoing scans. A few photos of Jadeja from NCA Bangalore were also circulated on the internet, where he is undergoing his rehabilitation.

There is still no clarity on when would Jadeja make a comeback in the Indian team. Jadeja is the most expensive player to be retained by Chennai Super Kings and the franchise would be hoping that the all-rounder recovers as soon as possible.