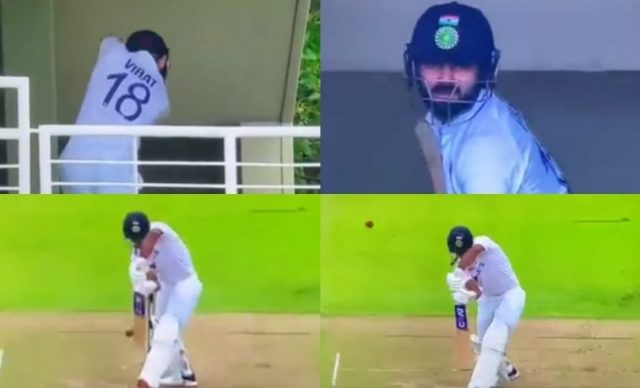 Indian captain, Virat Kohli, who returned to the playing XI after missing out on the last Test, was seen shadow practising in the dressing room, just before the ball that got opener Mayank Agarwal out in the 3rd Test in Cape Town.

Meanwhile, India won the toss in the series decider and opted to bat despite an overcast condition. KL Rahul and Mayank Agarwal struggled against the seaming and swinging conditions but somehow managed to survive 11 overs adding 31 runs giving their side a good start.

The pressure was certainly building on the Indian openers after three consecutive maiden overs. Rahul succumbed to the pressure as Duanne Olivier got the big wicket.

While Cheteshwar Pujara made his way to the crease, the official broadcaster managed to capture something interesting in the Indian dressing room. As speedster Kagiso Rabada began the 13th over of the Indian innings, Indian skipper Virat Kohli was seen shadow practising with his helmet on.

As it looked like the Indian skipper was presumably predicting another fall of wicket as it turned out opener Mayank Agarwal got out on the 2nd ball with the sequence of events leaving fans in shock.

Despite an innings of sheer grit and determination from the captain, India were bundled out 223 runs. Virat Kohli finished as the top scorer with 79 runs. For South Africa, speedster Rabada was the pick of the bowlers picking 4 wickets.

In reply, India pegged back early with Jasprit Bumrah dismissing Proteas captain Dean Elgar to have the hosts at 17/1 at the close of day 1.