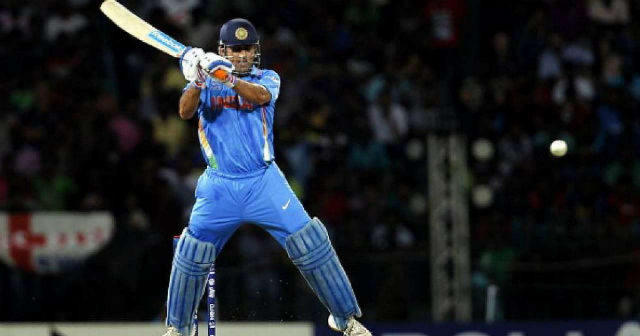 Regardless of where MS Dhoni is playing, the world appears to come to a halt when he swings his bat for a helicopter shot. Executing the shot requires skill, hand-eye coordination, and a lot of power. Over the years, Dhoni has mastered the shot and made it his trademark.

West Indian players witnessed MS Dhoni’s masterclass in the 4th ODI when they toured India in January 2007. In a video clip that has gone viral on social media, a young MS Dhoni can be seen giving a stunning display of helicopter shots at the IPCL Sports Complex Ground in Vadodara.

The video clip starts with an outrageous helicopter shot from MS Dhoni in the third ball of the 47th over. MS Dhoni generally plays the helicopter shot by slamming the ball over long-on or mid-wicket with the closed face of the bat. But what was unique about this hit was that MS here played the helicopter shot and dispatched a full-length delivery from the bowler Rayad Emrit over “long-off”.

The commentators said, “Straight down the ground, Never seen a shot like that before.”

Dhoni’s cameo helped India get to a massive total

In the penultimate over of India’s innings, Dhoni again targetted the same bowler. The ball was right in the arc and again MS used his bottom hand, to send it flying over long-on this time. Dhoni’s ability to clear the long boundaries with such ease astounded the experts on-air.

The third shot in the video was from the last delivery of 46th over. Marlon Samuels was the bowler. Dhoni smashed a fullish ball high to deep midwicket with his typical bottom-handed twirl of the bat. Dwayne Smith leaped near the boundary ropes and made an incredible effort to keep the ball inside the line. That was fantastic, but while attempting to pick the ball up to throw it back, the ball slipped from his hands and went on to touch the ropes.

MS Dhoni ended with a quickfire 40 off 20 balls and India reached a massive score of 341/3. Sachin Tendulkar scored a century in that match while Sourav Ganguly and Rahul Dravid also chipped in with fifties. In reply, West Indies could just manage 181 and India registered a comprehensive victory.