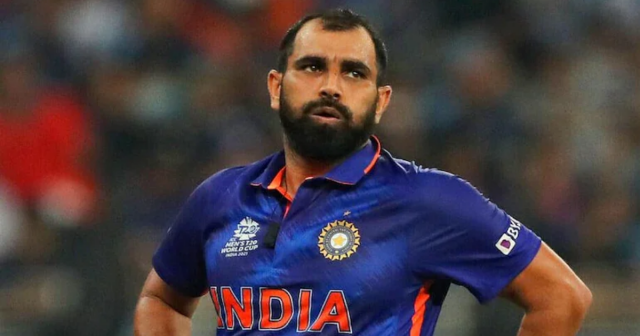 Fast bowler Mohammad Shami has been subjected to a lot of abuse on social media after India’s defeat against Pakistan in the T20 World Cup 2021. After Shami conceded 43 runs in Sunday’s match, netizens jumped in to blame him for siding with Pakistan since he is a Muslim. Hundreds of messages were posted on Shami’s Instagram account, accusing him of being a “traitor” who should be removed from the Indian squad.

In the midst of all the awful and disgusting trolling, a video from the day of the Champions Trophy 2017 final has resurfaced on the internet. Pakistan won that match convincingly by 180 runs. After the match, as the Indian players were going back to the dressing room, a Pakistani fan tried to provoke them.

These are comments under Shami's Instagram post.From the very beginning I predicted this would happen if India lost the match. pic.twitter.com/5v9rZN0Nzw

The fan also chanted “baap kaun hai” (Who is your father?), as the other Indian players followed Kohli back to the pavilion. They also ignored him, but when Shami heard this, he wasn’t pleased at all. The Indian pacer turned back and moved towards the fan to confront him. However, MS Dhoni stepped in at the right moment and controlled a situation that could have turned ugly.

Those calling @mdshami11 a #gaddar after the #IndiaVsPak match, please watch this 2017 video, when after losing to Pakistan, only Shami had the courage to confront the bullying Pakistani. #IndvsPak #shami #Kohli #ICCT20WorldCup #RohithSharma pic.twitter.com/8ixvhbJadP

While hate mongers trolled Shami, many people from the cricketing community, including Sachin Tendulkar and VVS Laxman, have come in support of the Indian pacer.

“When we support #TeamIndia, we support every person who represents Team India. @MdShami11 is a committed, world-class bowler. He had an off day like any other sportsperson can have. I stand behind Shami & Team India,” Tendulkar wrote on the microblogging site, Twitter.

When we support #TeamIndia, we support every person who represents Team India. @MdShami11 is a committed, world-class bowler. He had an off day like any other sportsperson can have.

I stand behind Shami & Team India.

The online attack on Mohammad Shami is shocking and we stand by him. He is a champion and Anyone who wears the India cap has India in their hearts far more than any online mob. With you Shami. Agle match mein dikado jalwa.

We are so proud of you @MdShami11 bhaiya 🇮🇳

Even I was part of #IndvsPak battles on the field where we have lost but never been told to go to Pakistan! I’m talking about 🇮🇳 of few years back. THIS CRAP NEEDS TO STOP. #Shami

Mohammed Shami has been a stellar performer for India for eight years, playing a significant role in many a victory. He can't be defined by one performance. My best wishes are always with him. I urge fans & followers of the game to support @MdShami11 and the Indian team.