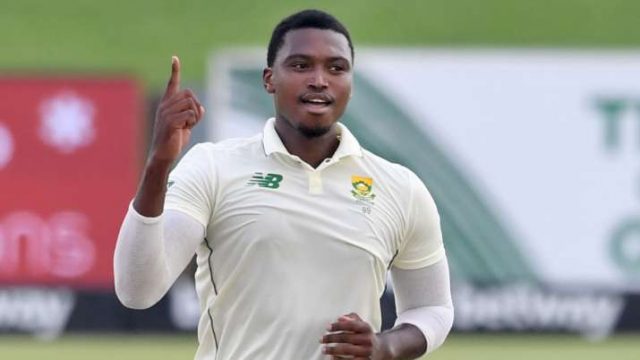 South African pacer Lungi Ngidi was not happy with the unresponsive pitch on day one of the first Test against India in Centurion. Ngidi stated that the lack of swing forced them to change their plans as well.

The pace bowler ended up taking all three wickets of India on day one as India dominated and posted 272-3 by stumps. KL Rahul’s stunning hundred and his opening stand of 117 made headlines while Ajinkya Rahane showed hints of returning to form.

Lungi Ngidi was the pick of the bowlers as he removed Mayank Agarwal, Cheteshwar Pujara, and Virat Kohli. While speaking after the day’s play, Ngidi shared his views about the slow pitch, He said as quoted by iol.co.za:

“To be honest, we expected more from the pitch in the morning; I expected more swing, but it didn’t happen, and then we had to change plans. You really have to be accurate with your lengths; if you’re too short, it gives the batters time, but if you’re too full they can drive easily.”

Lungi Ngidi, who returned to the Test set-up after a gap registered figures of 17-4-45-3. Kagiso Rabada and debutant Marco Jansen looked ordinary against some top-class batting by the Indian batters.

The first session will be important – Lungi Ngidi

The Proteas stressed that the second session of day 2 will be crucial if the hosts want to make a comeback in the Tests. Meanwhile, day 2’s play has been delayed due to inclement weather and an early lunch has been taken.

“I got a bit better rhythm bowling from the West Lane End and at lunch, I actually asked to be switched to that side. Sometimes you have to be patient because other guys want to have a go from a particular end, but once I got to bowl from that end, I started finding better lengths. That first session will be important; everyone must be on their ‘A’ game. If we can get a couple of wickets, we’ll be into their tail. We saw this evening that we were still getting balls beating the outside edge,” Lungi Ngidi added.

India are currently at 272/3 and will try to maintain the same momentum on Day 2 as well.