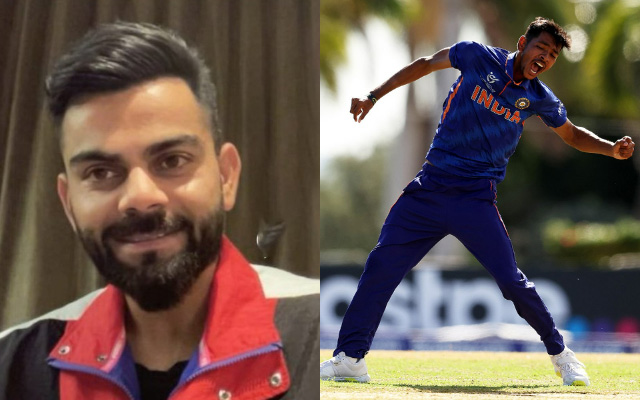 Former India captain Virat Kohli took some time out of his busy schedule to interact and motivate the U19 cricketers ahead of the high-profile final against England. It was then young fast bowler Ravi Kumar stunned the talismanic run-scorer asking about his weakness.

Kohli, who famously guided the Indian U19 side to World Cup glory in the 2008 edition, had an interactive session ahead of the all-important final. According to a report in the Indian Express, the Indian fast bowler opened up about his interaction with Virat Kohli after Yash Dhull-led Team India clinched the U19 World Cup title for the fifth time.

“I asked him what is his weakness. And he replied, ‘kyun abhi se out karne ki training kar raha hai kya’ (Why? Have you started training to get me out already, laughs)?,” Ravi Kumar revealed.

Ravi Kumar was one of the star performers for India in the summit clash, picking up four wickets. He along with Raj Bawa, who picked up a five-wicket haul, restricted England to 189 runs.

India were well-placed in the run chase after Shaik Rasheed put the team on the highway but England crawled back with wickets at regular intervals. Just when things looked in favour of the three lions, Nishant Sindhu and Raj Bawa took the game deep with a fine partnership.

England did manage to get Bawa out after a knock of 35 runs but Dinesh Bana struck two sixes in his 5-ball 13 runs knock to take India home safely with 14 balls to spare.

Bawa was awarded the man of the match award for his all-round show with both bat and ball.