Glenn Maxwell has certainly taken the IPL 2021 by storm with his incredible turnaround. The Australian giant, who only managed to score 108 runs last season has already struck 176 runs at a strike rate of 149.15. In three games he has hit 17 fours and 8 sixes. In the last two games, he has rescued his team by playing some mature knocks. Glenn Maxwell who could not hit a six the whole of last season has shown everyone that he is back. Here we analyze why this change has taken place.

Maxwell first came into the limelight as he was bought by Mumbai Indians for 1 million US dollars making him the highest-paid player in that year’s auction. Even after being bought for such a hefty price he did not play much and batted only a few times. Over the years he has gone to Kings XI Punjab (Punjab Kings) and Delhi Capitals. He has had a few good seasons as well where he scored runs while he just hasn’t been able to get going in a few. 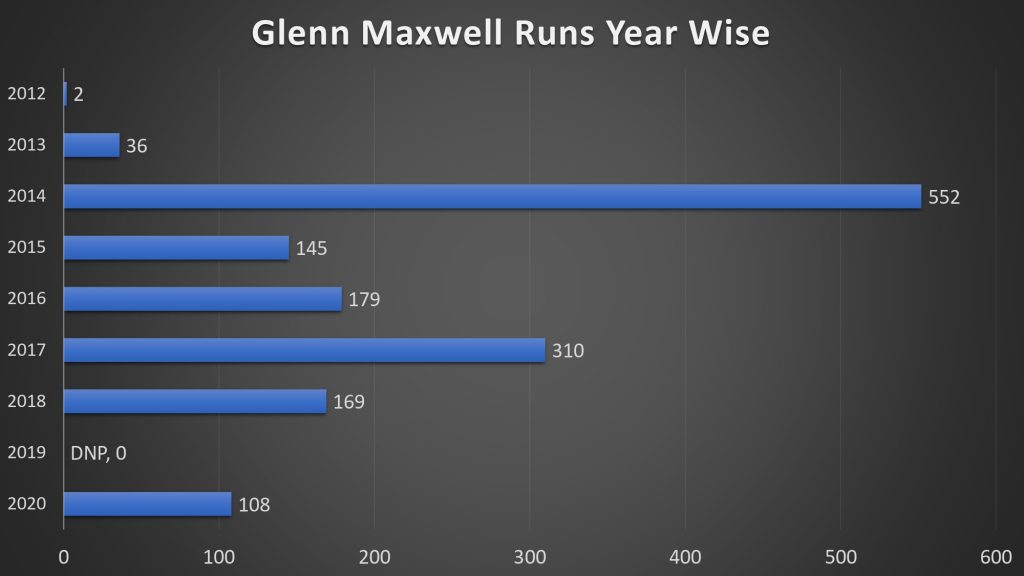 The graph clearly portrays that Glenn Maxwell had his breakthrough season for Punjab Kings in 2014. He scored 552 runs and was the main reason Punjab made it to the final. After 2014, he had mediocre 2015 and 2016 seasons. In 2017 he again seemed to have found his touch he scored a decent 310 runs but was surprisingly released by Punjab. He had a flop 2018 season for Delhi Capitals. He did not play in the 2019 edition and 2020 was his worst season where he played over 10 matches.

Everyone thought he would go unsold in the 2021 auction but RCB shelled out 14.25 crores for him. People were surprised but Royal Challengers Bangalore just had the perfect plan in mind.

Now let’s look at the different position Glenn Maxwell has batted over the years and where he has been the most successful. 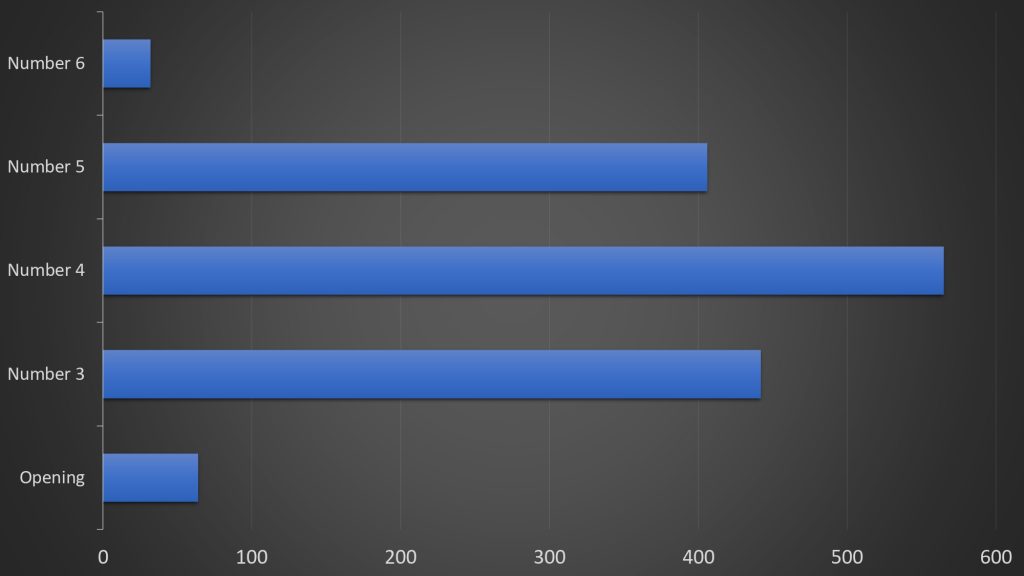 It is clearly visible that Glenn Maxwell is the most comfortable batting at number 4. He has scored the most runs at that position. Whenever he comes in to bat at number 4 he plays responsibly accelerating at the same time. He keeps the run-rate going and bails his team out. Batting up in the order allows him to play quite a few deliveries and gives him the freedom to bat freely as he has batting to come after him.

Runs scored do not tell us the full story we have to look at his average and strike rate while he bats at these different positions. This graph might give us a clearer picture. 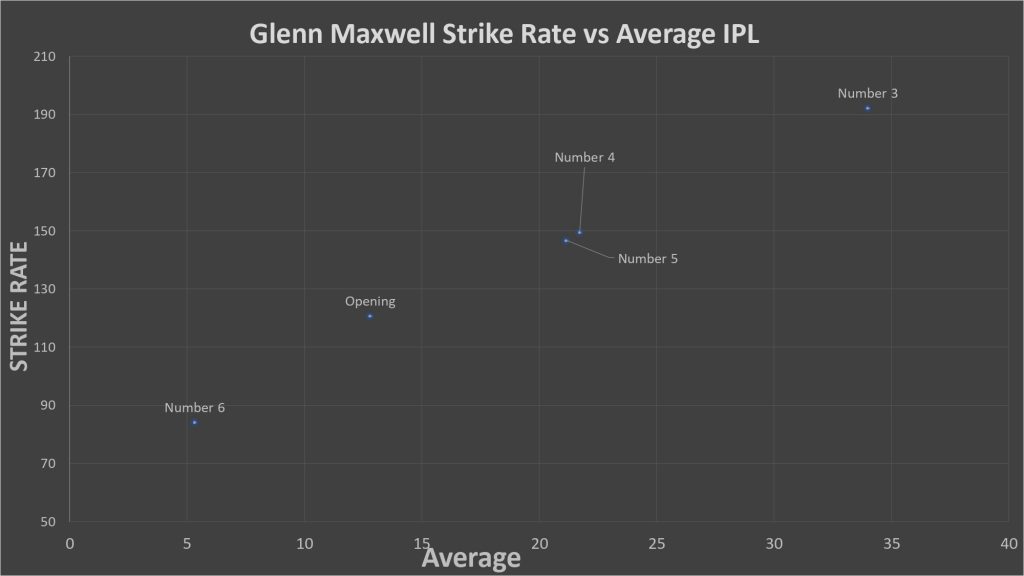 In the above graph, we can see that Glenn Maxwell is the most dangerous when batting at number three. His strike rate and average both are just skyrocketing at that position. While, if he bats down the order he is just unable to capitalize. Sometimes while batting down the order you can see that he does not get enough balls to face or he gets out trying to hit.

He has similar numbers while batting at number 4 and number 5, but at number 3 Glenn Maxwell is destructive and scores runs consistently. Both Punjab and Delhi have experimented with Glenn Maxwell. They made him bat from all positions from opening to number 6. He was often successful while batting up in the order, but failed to get going quite a lot of times as well. One of the reasons was that he was the last proper hitter the teams had which forced him to bat with extreme caution which is a little against his style of batting. He is a player who likes to open his arms and bat freely.

So finally what made him click at RCB so well?

Royal Challengers Bangalore who paid 14.25 crores really wanted Glenn Maxwell to do well. The team had a plan in mind. The RCB management had a choice to play him at either number 3 or 4, since Virat Kohli was opening the batting. Even though Glenn Maxwell has a phenomenal record at number 3 he was told to bat at 4. The reason is he strengthens the RCB middle order which looks weak without his presence. Royal Challengers Bangalore made another smart move. They gave AB de Villers the role of a finisher and made him bat after Glenn Maxwell.

“It’s a very nice start, new franchise for me and they have given me a specific role. To start like this is really nice. It’s nice to have batters behind you, you have freedom with AB to come and it’s a very similar role I have in the Australian cricket team. The support staff have been backing me as well. It’s just about using the experience. Get myself in and then go for the runs. Probably having those guys behind me is a luxury at RCB,” Maxwell said at the post-match presentation.

Maxwell playing at number 4 is a masterstroke by the RCB management and captain. As we saw in the previous game against Kolkata Knight Riders, Glenn Maxwell walked in when the score was 9-2. He stabilized the innings and then played his shots. He was followed by AB de Villers. Glenn Maxwell and Mr 360 combined to destroy the KKR bowling attack. RCB posted a total of 200+ on a pitch that teams were finding difficult to bat on.

Virat Kohli and Co. will be hoping that the Australian big hitter can continue his form with the bat. RCB who have not won a trophy yet are real contenders this year. They look strong and balanced in all their departments. They certainly have the team and players that might help them to go all the way.

The men in red currently sit on top of the points table having won 3 out of their three games. They will be seen in action next on Thursday 22nd April vs the Rajasthan Royals at the Wankhede Stadium in Mumbai.