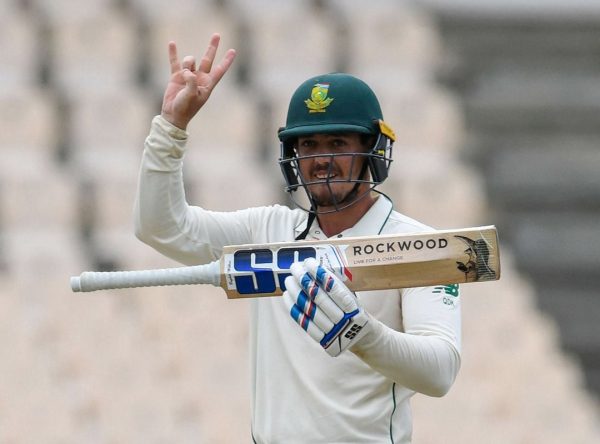 South Africa banked on an outstanding century from former skipper Quinton de Kock to take a crucial first-innings lead against West Indies in the first Test at the Darren Sammy Cricket Stadium. De Kock remained unbeaten on 141 runs from 170 deliveries to propel the Proteas to 322 runs in reply to West Indies’ 97 runs.

De Kock had a roller-coaster of a year in 2020 and the early part of 2021. Bestowed with leadership duties, Quinton de Kock witnessed a blip in form which hurt South Africa across all the formats. Now, relieved from the leadership burden, the southpaw announced himself with a bang on the West Indies tour in the first Test.

He smashed his sixth hundred in the format and dedicated it to a friend who lost his finger in Afghanistan and to rhino conservation in South Africa. De Kock celebrated both his fifty and hundred by his bat in such a manner that the name of Rockwood, an organization battling to save the endangered rhino.

He also prominently showed a hand gesture holding the ring finger of his right hand down and thereby spreading the other three fingers.

“It’s just a friend group I have back home,” de Kock told the host broadcaster. “A couple people know I am doing this initiative with the rhino thing and one of my friends got his fingers shot off in Afghanistan, and I said I will salute to him,” he added.

When quizzed further Quinton de Kock further revealed how he decided to dedicate a century with a finger celebration.

“I am doing Rockwood and the Rhino conservation and it’s a whole group of us. The one night we had a braai and we started talking and I said his finger being shot off is quite a limelight in our group of friends so I said I will do that as an accolade for him. I couldn’t believe it happened first time. I am sure my phone with the boys’ group is going to be buzzing,” de Kock added.

West Indies have put up a better show with the bat in the second innings. They ended the second day at 82 for four, trailing by 143 runs.