Former New Zealand skipper and wicket-keeper batsman, Brendon McCullum, has showered praise on the World Test Championship (WTC) winning Black Caps team. The No.1 ranked Test team in the world managed to beat India in a gripping encounter that needed a reserve day to witness an outcome.

The Kiwis chased down a target of 139 on the last day of the final, with skipper Kane Williamson and experienced campaigner Ross Taylor taking them home. Kyle Jamieson was awarded the Player of the Match for his brilliant fifer in the first innings and a fantastic spell in the second, where he dismissed Kohli and Pujara in consecutive overs.

Brendon McCullum, under whom New Zealand reached the 2015 ODI World Cup final, praised the humongous achievement of Williamson’s side, deeming the hangover after the victory might last for years to come. He felt the WTC Final was taking a route similar to the Kiwis’ previous two ICC finals.

“I’m not sure it’s sunk in yet. Overnight the game was on a bit of a knife-edge – it almost had that feeling of the previous two World Cups, get close but we won’t quite get across the line. I’m sure over the coming days, weeks even years we’ll look back at this moment and be so proud of what Kane’s men have been able to achieve and the heights they’ve been able to scale. For a country with pretty limited resources it is pretty amazing really. To do it against the powerhouse of world cricket on the biggest stage is something that makes it more satisfying,” McCullum stated on SEN radio.

Brendon McCullum explained that it was poetic to see Ross Taylor and Kane Williamson be at the crease to hit the winning runs. They were part of New Zealand’s losses in the ODI World Cups so this win feels sweeter to them, according to the maverick keeper.

“Thought it was really fitting to see New Zealand’s two greats, really, when you talk batting, to see them home. You could see on the faces of Kane and Ross just how much it meant to them and how satisfying [it was] to finally be able to climb that ladder.”

‘Best in our history’ – Richard Hadlee on New Zealand side

Sir Richard Hadlee, considered as one of the greatest fast bowlers to ever take the field, applauded New Zealand’s professionalism and also commended the support staff and management which did the work behind the scenes. 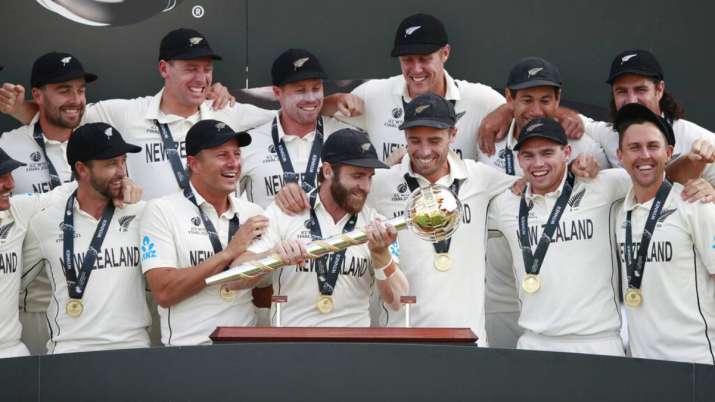 “The whole team has shown a high degree of professionalism. Their skill sets have complimented each other to make them a complete playing unit. The management and support staff have also played important roles in preparing players to perform at the highest level.

Over the years NZC have built a significant depth of players, which makes us one of the most competitive teams in world cricket. It’s fair to say that this current group of players is the best in our history,” Hadlee said.