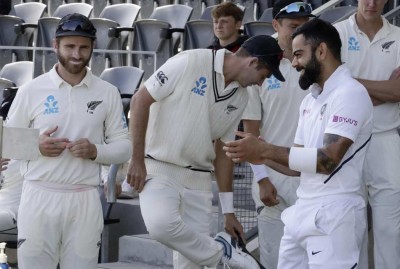 India’s lie in wait is almost over. With just eight days left for the final of the inaugural edition of the International Cricket Council (ICC) World Test Championship (WTC), which will be played at the Hampshire Bowl in Southampton from June 18-22, both the teams have prepped themselves up to take it to the centre of the field and battle it out. Consistency, diligence, persistence are the terms that can outline the two finalists.

On one hand, India look well settled and hinged, especially after their heroics Down Under in January. The youngsters are furbished and improvising in accord. On the other hand, New Zealand are fairly equitable as everyone is delivering proportionately.

The extravaganza will be played in Southampton, a neutral ground. India use the SG ball at their home, and NZ play with Kookaburra in their backyard. But the final will be played with grade 1 Dukes ball. The control of the wheel is allied here.

Kane Williamson and Virat Kohli glided their teams through the course in the most significant ways following their respective style of captaincy. Kohli is aggressive, Williamson is calm and composed but never boring. Their techniques are different, but the captains share a bunch of commonalities. Both of them step up on the occasions, and the captains know how to bring the best out of the team.

Behind the success of India, coach Ravi Shastri has architected a huge role. Over the years, he has inculcated an intangible formula in the team, positivity. Alongside Kohli, Shastri has invested in youth. The young lads are encouraged to augment and be bold on the ground; the result was the series win Australia despite injuries unhinged the seniors, and Kohli was on leave. The “true ambassadors of the game” as Brendon McCullum called them, will try their best to keep their hand at the trophy.

India have a distinguishable set of star-studded batters in the line-up. India’s batting performance arguably has been envied by the other teams in the WTC. Ajinkya Rahane, who has been criticised for not being consistent, is the highest run-scorer for India.

Kyle Jamieson has snapped 36 scalps in just six games since his debut in 2020 against India. For India, Ishant Sharma is the leading pacer with 36 wickets in 11 games. For India, Sharma, Mohammad Shami, Jasprit Bumrah and Umesh Yadav are the pacers who are in the squad. They have bagged 135 wickets cumulatively. On the other hand, Southee, Jamieson, Neil Wegner and Trent Boult have cleaned up 151 wickets together. NZ have the upper hand here.

Considering some miscellaneous factors, Hanuma Vihari, who is a part of the squad, had a stint with Warwickshire in the County Championship. Vihari scored a half-century in three matches. He may not be the first choice with Ravindra Jadeja being back, but Vihari’s experience will help the men in blue to amend themselves accordingly.

Also Read: How Will Reserve Day Be Used In World Test Championship 2021 Final?

The Dukes ball is expected to sting the batters when it is overcast. But if the sky is clear, the batters can capitalise on it. As Kiwis are playing two Tests against England ahead of the World Test championship, the matches will help them to bring forth the perfect 11 and can be considered as the warm-up games. Hence, NZ will fairly get acclimatized to the equations of the ball. Debutant Devon Conway knitted a double ton on his debut match a few days ago.

After crossing the sword with England in two Tests ahead of the final, NZ will be done with their preparations. India will engage in some inter-squad friendlies for warm-ups. However, the Black Caps are yet to play a Test at the Ageas Bowl where India have already played two. Though India’s record there is no inevitable, India lost both of them. In 2014, under the captaincy of MS Dhoni, India suffered a 266-run defeat.

In 2018, Virat Kohli’s men were handed over a 60-run conquest. India’s highest scores on that pitch are 330 in 2014 and 276 in 2018.  Except for Shami, all other bowlers have played one test apiece. Shami got seven wickets in two matches, Ravindra Jadeja five in one, Ishant and Bumrah clubbed four scalps in a solitary game each.

In two fixtures, Rahane batted for 168 runs averaging 56.00, and Virat Kohli racked up 171 runs at an average of 42.75. Cheteshwar Pujara, who has garnered applauses for standing like a stonewall in the line-up knocked up 163 runs in two battles averaging 54.33.

Who will win the WTC final?

Two brilliant teams in the longest format of the game; New Zealand and India share a fair amount of opportunities to flare in the final. It is futile to put one team as the favourite, as both are at their best and equally sharing the pie of advantages.

Earlier only one team could lift the trophy, but with the new rules introduced by the ICC, both of them can share it. The armours are full; the battle is awaited. It will be a delight to see two brilliant teams locking horns at the Hampshire Bowl, Southampton displaying the virtues of the game.

[Watch] Rishabh Pant Goes Against Team Protocol; Does Something That Was Not Asked To...

“Jammu Express” – Fans React As Umran Malik Gets His India...