Less than 50 percent of the WTC matches have been played till now, while the ICC expects that only 85 percent of the tournament will be played by the time of the season finale. Meanwhile, the ICC Cricket Committee headed by former Indian skipper Anil Kumble approved of the change in point system after several, after several series have been affected by the COVID-19 pandemic.

Also Read: WTC Final To Be Played As Per Scheduled

“Both the Cricket Committee and Chief Executives Committee supported the approach of ranking teams based on completed matches and points earned as this reflects their performance and doesn’t disadvantage teams that have been unable to compete all of their matches through no fault of their own,” said ICC Chief Executive Manu Sawhney.

“We explored a whole range of options, but our Members felt strongly that we should proceed as planned with the first-ever World Test Championship Final in June next year” he further added. 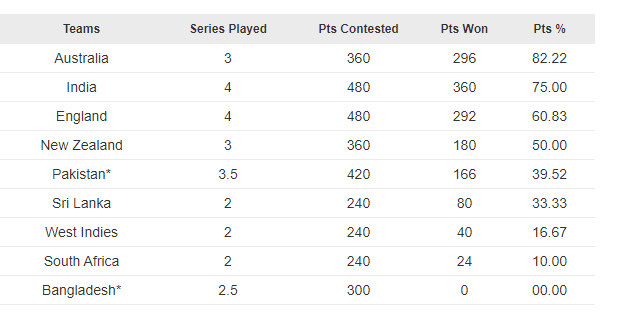 The cricket season starts for a number of teams from November-December onwards in the post-COVID era. India will play Australia overseas, followed by England at home and abroad. Australia will play England in an Ashes series as well. Pakistan are scheduled to play two more series while South Africa and West Indies. Bangladesh are yet to bag points in the championship so far.

Also Read: WTC Finals to Be Decided On Percentage