The most anticipated tour of the year 2020 is all set to go underway as India take on almighty Australia at their own backyard. This tour is going to be full of action as we get to witness three ODIs, T20s and four tests between the nations. The men in yellow Australia will be looking to prove a point after having lost both the ODI and Test series at home last time around.

But this time the situation is different for the Indians as they will be missing the services of their limited-overs vice-captain Rohit Sharma in the limited-overs leg as he’s currently recovering from an injury he sustained during the recently concluded IPL where Mumbai Indians emerged champions for the fifth time. Whereas Virat Kohli will only feature the limited-overs leg and the first test at Adelaide after which he will be returning home as he’s expecting his first child with wife Anushka Sharma.

With the T20 series about to kickstart in few days time, we thought of looking at few on-field duels that we will get to witness. Whether its David Warner or Virat Kohli, each batsman doesn’t fancy some or the other bowler in the World. Similarly in this series as well we will be witnessing some of the best batsmen go one on one against the best bowlers in the World. It’s going to be a contest worth watching between the two.

Also Read: Wriddhiman Saha Begins His Recovery, Resumes Batting Ahead Of The Test Series Against Australia

Let’s take a look at 3 On-field Duels To Watch Out For In India vs Australia T20is: 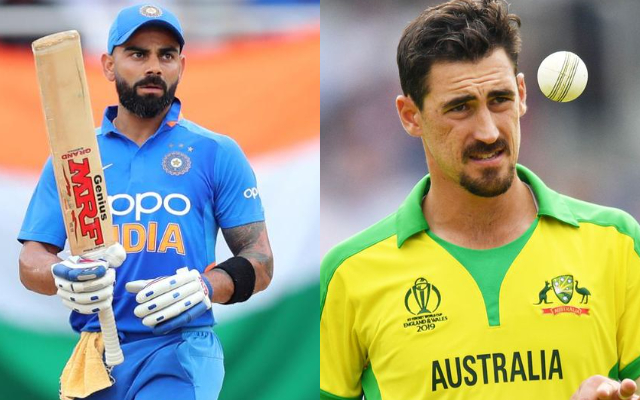 The former teammates at Royal Challengers Bangalore will be going face to face as Virat Kohli is more likely to face Mitchell Starc more than any other bowler in this series. Whether its the limited-overs leg or the Test series we will be seeing fierce competition between the two individuals.

Starc missed the last ODIs due to a slight niggle but skipper Aaron Finch confirmed that he will be fit to play T20Is which will be a real boost for the host.

Virat Kohli typically had a problem of playing the outside off deliveries in the 2014 tour of England, with Starc in the side Australia can try to attack or rather trap Kohli with the angling deliveries of Mitchell Starc. Moreover, It was also rumoured that RCB will most likely target Starc at the 2021 IPL auction which is why we can as well expect some sort of banter between the two during the intense competition.