There are old estivages between the Indian cricketing fraternity and Indian politics. Both are contrast fields and barely relate to each other. However, people’s attention should be the only common thing the two professions may share.

According to the prominent historian Ram Guha, Palwankar Baloo was the first cricketer to join politics. He was a Dalit leader and contested in a by-election of Bombay (now Mumbai) Municipality in 1933-34; the cricketer turned leader further went on to lose the election to a Parsi doctor Homi F Pavri, then.

Baloo, again was a candidate of the Indian National Congress (INC) against Dr. Bhim Rao Ambedkar, where he once again, lost by a margin of more than 2000 votes. This was in 1937, way before India earned the independence. It was in 1971 when Nawab Mansoor Ali Khan Pataudi, a cricketer, turned politician for the first time after independence.

Here is a list of five Indian cricketers who have or had joined politics.

Manoj Tiwary joined the Trinamool Congress, a political party that is predominantly active in West Bengal, in February 2021, ahead of the state legislative assembly elections. He fought the elections from the Shibpur constituency and won the seat. The 36-year-old is a minister of state for the Affairs of Sports and Youth.

Tiwary, on the other hand, still represents Bengal in domestic cricket. The right-hand batter recently hit a ton in the first semi-final of the Ranji Trophy 2022 season, against Madhya Pradesh. He has 9398 First Class runs while 5466 List A runs in his account. Tiwary has represented India in 12 One Day Internationals, scoring a century and a half-century, during his time.

He has also played three T20 Internationals for the country and was a part of Delhi Daredevils (now Delhi Capitals), Kings XI Punjab (now Punjab Kings), Kolkata Knight Riders (KKR), and Rising Pune Supergiant (RPS) squads in the IPL, from 2008 to 2018.

Gautam Gambhir, the former Indian opener, joined the Bharatiya Janata Party (BJP) in March 2019, ahead of the 2019 Indian general elections. He was the party’s candidate from East Delhi and won the election by 695,109 votes, to take the oath as a Member of the Parliament, Lok Sabha.

Gambhir needs no introduction to the cricketing society, as the 40-year-old has more than 10000 international runs in his account, with 20 centuries adjacent. Gambhir was an integral part of the 2011 World Cup-winning Indian side and has won two Indian Premier League (IPL) titles while leading the Kolkata Knight Riders (KKR).

The former Indian batter and renowned commentator Navjot Singh Sidhu started his political career with BJP back in the 2004 Indian general elections. He was elected as a Member of the Parliament (MP) from the Amritsar constituency, from 2004 to 2014. In April 2016, Sidhu took the oath as a Rajya Sabha MP; however, the 58-year-old resigned from the office in July 2016.

In January 2017, Sidhu officially joined the Indian National Congress (INC) and was elected as a Member of the Punjab Legislative Assembly from Amritsar East. Sidhu was handed the responsibility of the Ministery of Tourism and Local.

In the 2022 Punjab Legislative Assembly elections, Sidhu, however, lost the election from the same constituency – Amritsar East, after a row regarding several aspects and schism within the Punjab Congress. Currently, he is in the prison in Patiala, after being found guilty in a road rage case.

Moreover, Sidhu has scored 7615 international runs for India, with 15 hundreds and 48 half-centuries in his account.

The former India off-spinner Harbhajan Singh is a Member of Parliament Rajya Sabha, from Punjab. He was nominated for the position by the Aam Aadmi Party and went unopposed, in March 2022.

Besides, Singh has more than 400 Test wickets in his account. While in ODIs, the 42-year-old has picked 269 wickets in 236 matches. Singh also has a couple of Test hundreds and 9 half-centuries in his name. He has predominantly represented Mumbai Indians (MI), Chennai Super Kings (CSK), and Kolkata Knight Riders (KKR) in the IPL, during his time. 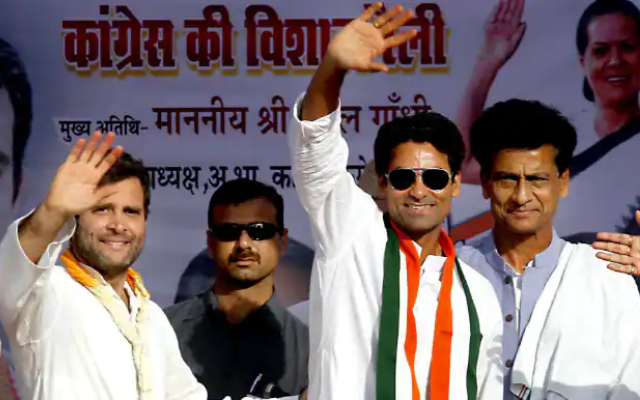 Former Indian cricketer Mohammad Kaif, who is considered as one of the finest fielders, joined Indian National Congress (INC) ahead of the 2014 Indian general elections. The 41-year-old was contesting for a seat in the Lok Sabha from Phulpur, a constituency in Uttar Pradesh, but went on to lose the election to a BJP candidate. Kaif, however, hasn’t been active in politics since then.

Besides, the former right-hand batter has more than 2500 ODI runs, with two hundreds and 17 fifties in his account. Kaif is an under-19 World Cup-winning captain who led the side to the triumph in the 2000 edition.