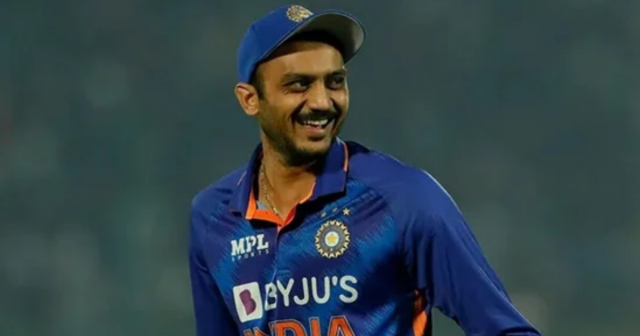 In early 2021, all-rounder Axar Patel had a spectacular maiden Test against England, becoming the sixth Indian spinner to record a five-for on debut. Years of practice had finally paid off for Axar as Virat Kohli gave him the navy blue cap.

Axar hasn’t looked back since, taking 36 wickets in his five Test appearances. Axar’s five fifers have responded to those who labelled him a “Limited-overs specialist” early in his career. After these performances, the future of the 28-year-old Axar appears to be quite bright.

Here are 5 facts about Axar Patel that you should know :

Axar Patel was born on January 20, 1994, in Gujarat. Akshar Rajeshbhai Patel was his actual name. However, his principal misspelt his name as ‘Axar’ in the School leaving certificate. When Axar was selected to tour Bangladesh, he received his passport, and they referred to him by his official school name. This is how ‘Akshar’ became ‘Axar’.

Axar Patel aspired to be a qualified engineer. During his school years, Axar was an extremely intelligent student. But after learning how brilliant Axar is at cricket, his father pushed him to pursue the sport professionally.

Axar’s grandmother had a dream of seeing him play for the Indian national team. Axar, who adored his grandma, did make his India debut, but his grandmother was not around to witness the occasion.

She passed away when Axar was playing a U-19 match in Gandhinagar.

#2 Four wickets for no run

Akshar Patel took four wickets in six overs in the first-class match against South Africa A. What’s fascinating is that he didn’t even concede a single run in his spell.

In 2013, Mumbai Indians signed Axar Patel. However, in that season, Axar never featured in the Playing XI. In the next edition, the left-hander was picked by Kings XI Punjab and he proved himself by winning the Emerging Player of the Tournament award. He ended the season with a total of 17 wickets and a 6.22 economy rate. Axar was a pivotal component in Punjab’s run to the finals.

Axar also has a hat-trick in the IPL. Against Gujarat Lions in IPL 2016, he took the important wickets of Dinesh Karthik, Dwayne Bravo, and Ravindra Jadeja to record his first IPL hat-trick. In the player auctions for IPL 2019, he was signed by the Delhi Capitals. Since then, he has been a regular member of the Playing XI and is also among the four players retained by the franchise for IPL 2022.