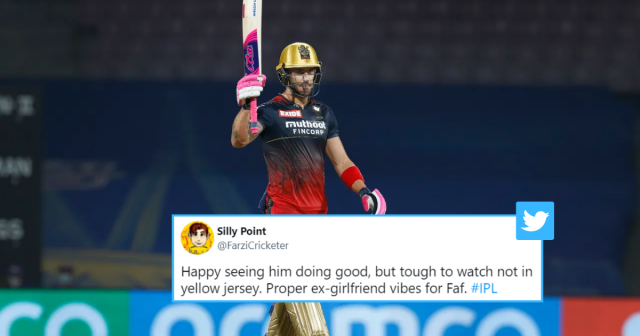 Royal Challengers Bangalore and Punjab Kings are currently facing each other in the Match 3 of IPL 2022 at DY Patil Stadium, Navi Mumbai. PBKS’ skipper Mayank Agarwal won the toss and elected to bowl first.

Faf du Plessis and Anuj Rawat opened the innings for RCB. The pair gave a slow but steady start to the team. Both of them added 50 runs for the first wicket before Anuj was dismissed by Rahul Chahar.

Faf du Plessis initially was not able to score runs at a great pace and was 17 off 30 balls at one stage. However, as he spent more time in the middle he got his rhythm back and reached his fifty in 41 balls.

Faf’s knock consisted of 3 fours and 7 sixes. Shahrukh Khan took a brilliiant diving catch to dismiss the RCB skipper off the bowling of left-arm pacer Arshdeep Singh. Faf ended his innings at 88 runs off 57 deliveries. He stitched a 118-run partnership with Virat Kohli for the second wicket. Faf also completed 3000 runs in the IPL during his knock.

Here is how twitter reacted to Faf du Plessis’ first knock for RCB:

The thing about the best t20 batters is 1 not panicking when battling a bit 2 reading the bowler and making correct decisions like Faf did vs Smith and 3 carrying your innings on when set. Brilliant viewing for any batter this @faf1307 @RCBTweets

Fantabulous Knock @faf1307 Sir and What an incredible Counter attack after a Slow Start. #FafDuPlessis
"ONE OF THE BEST BATSMAN OF CURRENT TIME" pic.twitter.com/l8OqOSHO77

Remarkable knock from Faf du Plessis. Dropped on 7, scrabbling around for 17 runs from 30 balls – his next 27 balls brought 71 runs. A serious way to announce his arrival as RCB skipper. #IPL2022 #PBKSvRCB

Faf DuPlessis scored a massive half century on his RCB Debut!

Happy seeing him doing good, but tough to watch not in yellow jersey. Proper ex-girlfriend vibes for Faf. #IPL

That is how a captain sets up an innings..Faf showing how it should be done with switching on the overdrive button 👏🏻 #FafDuPlessis #PBKSvRCB #IPL2022

The real Faf has arrived. The stand-in look alike has gone.

Faf du Plessis Continues His Great form in the IPL

Faf du Plessis was the second highest run-scorer in IPL 2021. He scored 633 runs in 16 matches at an average of 45.21 and Strike Rate 138.20. Faf was just 2 runs behind his CSK opening partner Ruturaj Gailkwad in the orange cap race.

In the IPL 2022 auctions, RCB bought Faf for 7 crores. He was later named the captain of the franchise as well.