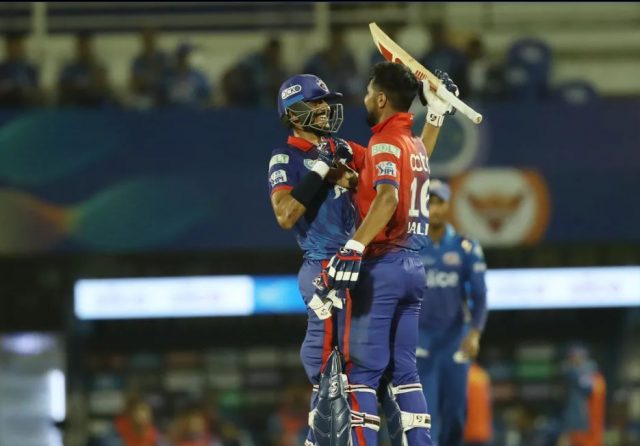 All-rounders Axar Patel and Lalit Yadav pulled off a fantastic win for the Delhi Capitals against the Mumbai Indians on Sunday in the Indian Premier League 2022 season. The duo powered their team to a 4 wickets victory at the Brabourne Stadium.

The Delhi Capitals began the chase positively, scoring at about 9 runs per over in the first three overs. However, they lost Tim Seifert for 21 runs in the fourth over against Murugan Ashwin.

From there, the Capitals suffered a batting collapse and were soon reduced to five down for 72 runs. Lalit Yadav and Shardul Thakur tried to steady their ship, thereafter. However, Shardul too was dismissed for 22 runs.

All-rounder Axar Patel walked out to bat, following Shardul’s wicket. He looked very confident at the crease, taking on the Mumbai Indians bowlers. Axar slammed them all over the park, to bring Delhi back in the game.

He was also given a reprieve in the 17th over when Tim David dropped his cath at long-on. On the same delivery, the Mumbai Indians also missed a chance to run Axar out. The Lalit Yadav and Axar Patel duo put together 75 runs for the seventh-wicket stand to lead Delhi to victory.

WHAT. A. CHASE. 🔥🔥@DelhiCapitals register their first victory of the season in style!

Both Axar Patel and Lalit Yadav remained unbeaten in the match. Lalit Yadav slammed 48 runs off 38 balls, including four boundaries and two sixes. On the other hand, Axar Patel smashed three sixes and two boundaries during his 17-balls 38 runs knock.

Earlier in the match, Rishabh Pant won the toss and asked Mumbai Indians to bat first. The Rohit Sharma-led team put on 177 runs on the board, on the back of Ishan Kishan’s unbeaten 81. Kuldeep Yadav was the pick of the bowlers for Delhi with 3/18 in four overs.

Let’s take a look at how Twitter reacted to Delhi Capital’s win over Mumbai Indians:

Very poor bowling by Mumbai Indians in the last few overs. Axar Patel and Lalit Yadav made full use of the opportunity.

Delhi Capitals looked down and out but won this match suddenly out of nowhere. Thanks to this superb 75-run stand between Axar & Lalit. 👏🏻👏🏻#DCvMI | #IPL2022

Fantastic win for Delhi Capitals. Mumbai Indians had the match under control but kudos to Lalit Yadav & Axar Patel to get DC over the line. Dropped catch of Axar proved very costly. MI have lost the IPL opening game for the 10th successive time!

AXAR Patel and Lalit Yadav ,what an amazing come back for Delhi Capitals!!
Brilliant and Smashing win ! @DelhiCapitals #DCvMI #RjAlok

What a Clutch Performance by both Axar and Lalit to take Delhi home…from a loosing stage! This is actual Responsibility! Some fluke with 1(2) can't relate……….#IPL2022 #DCvMI pic.twitter.com/iZOHFptlRt

What a comeback win by Delhi Capitals, they were 104 for 6 from 13.2 overs while chasing 178 runs and then won the game with 10 balls left. All thanks to Axar and Lalit.

Delhi Capitals have defeated Mumbai Indians in style. They needed 74 in last 40 balls with just 4 wickets in hands, but Lalit and Axar just destroyed the MI bowling unit. What a win by DC, they've won with 10 balls to spare.