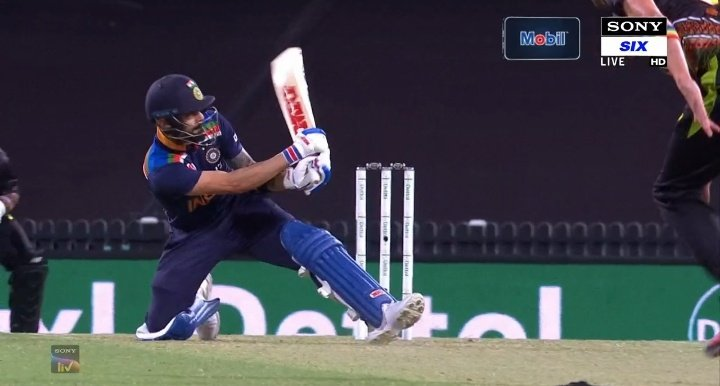 Former South Africa skipper AB De Villiers had a fascinating reaction after Virat Kohli played the scoop shot during the 2nd T20 between India and Australia at the Sydney Cricket Ground. Both teams entered into the 2nd T20 after with India one up in the series which why a lot was on the line for Australia as they had to win the game to keep the series alive.

India after having won the toss elected to bowl first wherein Australia posted a heavy total of 194 runs at the end of 20 runs after their stand-in skipper Matthew Wade went all blazing guns as he notched up 58 runs in 32 deliveries then ended up giving his wicket away in an absolute comedy piece of an error made by him. In reply, India started off briskly with KL Rahul and Shikhar Dhawan as they put up 50 runs partnership before Rahul lost his wicket to seamer Andrew Tye.

During India‘s lofty pursue of 195 at Sydney, Virat Kohli shocked everybody by playing an incredible scoop shot that went over fine-leg off for a six in Andrew Tye’s finished.  The Indian batting maestro moved over his stumps to make room before, at last, scooping the ball for a six over deep fine leg.

Reacting to the outrageous shot, Kohli at the post-match presentation ceremony said that he will ask AB de Villiers about the shot. In the wake of Kohli playing a shot that came directly from AB De Villiers’ batting book, the maestro himself reacted to the scoop shot played by Kohli.

After an exciting win over the Australians in the 2nd T20 at Sydney, the visiting side have now sealed the T20 series with a comprehensive 2-1 lead in the offering. The comeback by the Indian team was commendable given that they started the tour with two back to back losses in the ODI series. Apart from this being India’s 3rd consecutive win in this series, this was also India’s 10th consecutive in the T20 format.