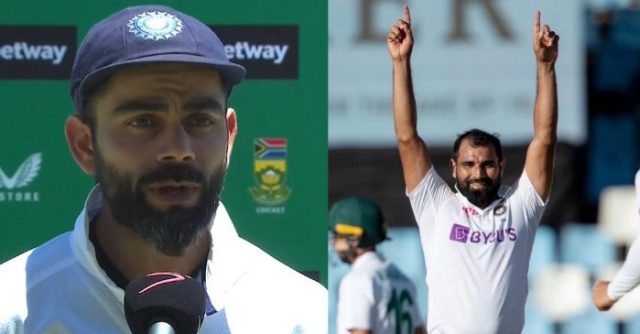 Indian Test captain Virat Kohli has praised India speedster Mohammed Shami as one of the “three best seamers in the world” after India’s historic win against South Africa in Centurion as well.

Shami, who was trolled and abused on social media not long before the tour, ended as the top wicket-taker in the Test. He bowled a phenomenal combined spell of 8-107 and also became the fifth Indian seamer to take 200 Test wickets.

Kohli, while speaking in the post-match presentation after the huge 113-run win, said that Shami’s ability to take wickets on flat wickets on the back of his brilliant control and skills make him a “world-class talent” as well.

Happy To See Him Get 200 Wickets: Virat Kohli On Mohammed Shami

Kohli said: “Absolutely world-class talent. For me, he’s easily among the best three seamers in the world right now. Just the way he bowls on pitches which don’t seem to offer too much to others. He just gets that extra bit from any pitch he bowls on purely because of his strong wrist, his seam position, and his ability to hit a length consistently, and areas where you can’t leave the ball is his biggest quality. Very, very happy for him to get 200 wickets.”

Along with Shami’s brilliance, Jasprit Bumrah was equally brilliant in the Test. The pacer picked up five wickets. Kohli also opened up on Bumrah’s impact on the Test as well.

Virat Kohli added: “The fact he didn’t bowl much in the first innings probably allowed the opposition to get around 40 extra runs. We probably would have had a larger lead and the game wouldn’t have gone that close that it did on the last day… Us as a batting unit speak about this often if we have to face them (the bowling unit), it’s a very difficult task in today’s cricket. Just the way these guys bowl together has been a hallmark of our team getting a result in difficult situations. Huge credit to them for not just this Test but where Indian cricket is for the last 4-5 years.”

Along with them, Mohammed Siraj and Shardul Thakur also contributed well Siraj claimed 3-92, Thakur picked up 2-62 and Ravichandran Ashwin’s too picked up 2-55 as well.

Kohli also applauded the century stand between KL Rahul and Mayank Agarwal on Day 1, saying: “Winning the toss, batting first overseas is always a tough challenge. Credit goes to the opening partnership Mayank and KL the way they set it up this Test match for us… We have a lot of belief in our bowling unit that they’ll get the job done for us… We just need runs on the board and that’s exactly what was provided by the opening partnership. That was the difference in the game.”

However, Team India took a 1-0 lead in the three-match series. It was their fourth Test win in South Africa. The second will begin on January 3 in Johannesburg.

“We got off to the perfect start. Of course, getting a result within four days, you have to understand one day was washed out – just shows how well we played this Test match and how motivated and keen we were to start off in the manner we did at Centurion. It’s always a difficult place to play against South Africa, we had to be absolutely clinical with the bat, the ball, and in the field as well and hence we got the result we wanted and yeah, it’s a top start for us,” Virat Kohli concluded.

Meanwhile, South African captain Dean Elgar has stated that batting was the difference between the two teams. India bundled South Africa out for under 200 in both innings as well. He also applauded India’s openers for setting the platform. While speaking at the post-match press conference, Elgar said: “With bat in hand, we let ourselves down quite a lot. I’d say the batting was the difference between the two sides. We’ll have a little sit-down with myself and the management to strategize.”

He added: “We didn’t do a lot of wrong things. It’s not all doom and gloom for us. We thrive under the pressure which is a positive for us. It’s always going to be tough because the wicket’s playing slower (first morning). Indian openers did the fundamentals right. We didn’t quite execute the lengths well.”

“After some good chats, our bowlers executed the lengths and restricted India to what we thought was a par score. I can’t emphasize enough the hard work our bowlers put in to get 20 wickets,” Dean Elgar concluded.