Bollywood actor Sonu Sood helped veteran Indian spinner Harbhajan Singh after he asked for help related to COVID treatment for a hospital in Karnataka. On May 6, he helped Suresh Raina with oxygen cylinder which he wanted for the treatment of his relative. Meanwhile, earlier today Sood, who is famous for his humanitarian work across the nation amid the COVID-19 crisis, has come to Harbhajan’s aid by vowing to arrange COVID-19 resources for the Indian spinner. 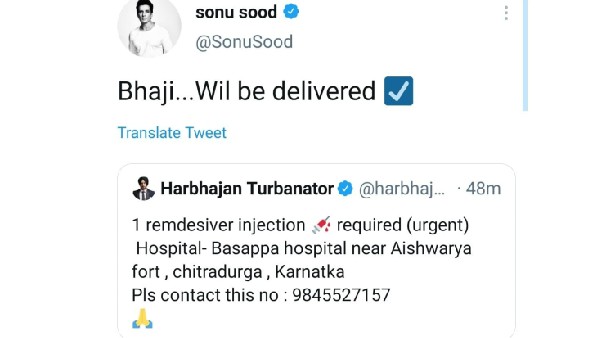 Harbhajan Singh had a thank you for Sonu Sood who has time and again responded to anyone who has asked for help from help at this time of crisis.

Thank you my brother 🙏🙏..may god bless you with more strength https://t.co/pPtxniRpDU

Sonu Sood has been working tirelessly behind India’s fight against COVID-19. Last year he arranged for the return of the migrant works who were working throughout the country. Now this year, with the COVID count in India rising rapidly, he has been working behind the arrangement of oxygen cylinder for the people of the country. The Bollywood actor helping Harbhajan is another example of the great work that he has been doing for the country since the last one and a half years.

In a bid to strengthen India’s fight against the COVID-19 pandemic, actor Sood is reportedly planning to install oxygen plants in several states of India. “We have seen a lot of people suffering because of the unavailability of oxygen cylinders. We have got it now, and are already giving it to people. However, these oxygen plants will not only supply to entire hospitals but will also get these oxygen cylinders filled up, which will solve a major problem of the people suffering from Covid-19,” Sonu was quoted as saying.

Meanwhile, Harbhajan Singh played three games for Kolkata Knight Riders and went wicketless in the first half of IPL 2021. He was roped in by the two-time IPL champions for his base price of 2 crores.