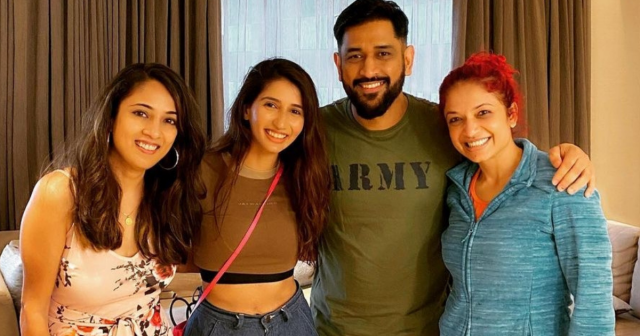 The legendary Indian captain Dhoni who is known for not spending a lot of time on social media has been recently making a lot of appearances lately. Meanwhile, Dhoni is currently in Mumbai from where a lot of pictures of MS Dhoni have been going viral on social media.

MS Dhoni came to Mumbai for a friendly football match. Later he was seen shooting a commercial with the infamous Farhan Khan. Also, his latest mohawk look has been going viral on social media. Also, he has earned a lot of praise from fans regarding his new look. Recently Mahi was seen spending time with his Chennai Super Kings teammate Robin Uthappa’s wife.

“Always fun hanging out with the lightning man Mahi.. missed thunder tho @sakshisingh_r”

Notably, the Dhoni couple and Uthappa couple are close friends, often they have been seen spending time together.

The captain of the champion franchise MSD has been retired from international cricket. However, he is still a regular member of IPL based franchise Chennai Super Kings (CSK). The 2020 season was the worst season for Dhoni’s led side in the IPL. However, they bounced back stronger and performed exceptionally in the IPL 2021. Also, The MS Dhoni-led side won 5 out of 7 games and was placed at no.2 spot in rankings.

Meanwhile, the former India skipper didn’t have much cricket left in him, so he will be looking forward to ending his journey with yet another IPL trophy in his hands.