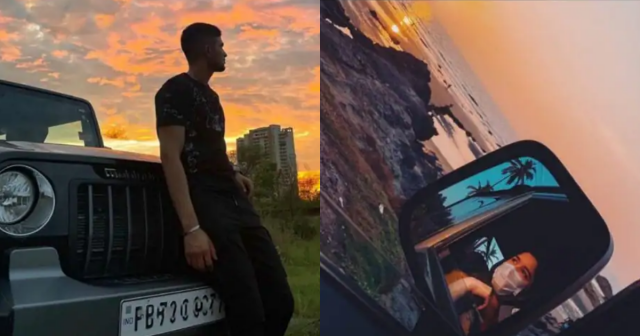 Daughter of legendary cricketer Sachin Tendulkar, Sara recently shared photos from her Goa vacation where she celebrated the New Year along with her friends. Sara’s most recent story update on Instagram, however, has sparked speculations that she is holidaying in Goa with her alleged boyfriend and Indian cricketer Shubman Gill.

In the picture, Sara can be seen sitting in a car absorbing the gorgeous sunset view at a beach. The photo has fueled rumours that it was taken inside Shubman Gill’s Mahindra Thar, which was awarded to him for exceptional performance in the 2021 Australia tour.

The Indian batter had also posted his pictures of enjoying in Goa. Shubman captioned his post as: “Swipe right to sum up my NY mood” and Netizens now believe that the background in his photos is similar to where Sara clicked her pictures. These commonalities in Sara and Shubman’s images have prompted social media users to believe that the alleged pair is chilling together in Goa. Both of them have been reportedly dating each other for quite some time. However, neither of them has acknowledged or denied the rumours.

Sara Tendulkar has taken her first steps into the modelling world by working for a well-known apparel company. On Instagram recently, she shared her first promotional modelling video, which also featured actresses Banita Sandhu and Tania Shroff. There have been rumours that Sara can soon be seen in Bollywood on the silver screen.

Sara is Sachin and Anjali Tendulkar’s eldest child. She has graduated from University College London with a degree in medicine. Despite having an Instagram following of 1.7 million, Sara usually prefers to stay away from the spotlight.