Danni Wyatt, the England women’s top-order batter recently (June 27) shared a story of her, having dinner with Arjun Tendulkar, Sachin Tendulkar’s son. Wyatt shared the picture via Twitter also. She wrote: “Good to see my little mate for a Nandos yesterday”.

The Tendulkar family has been on a vacation to the United Kingdom (UK) over the last few days, as Sachin, via his official social media handles, has posted several photographs of his UK tour. 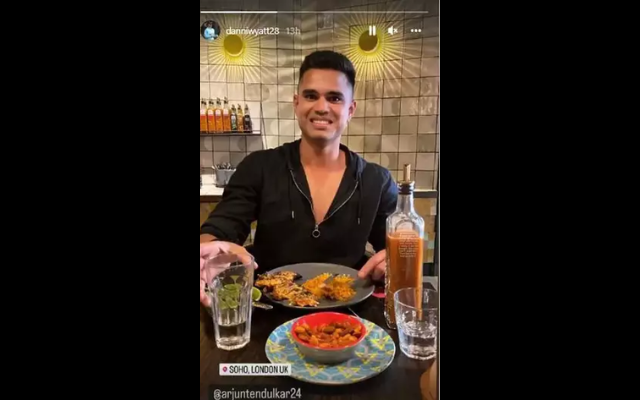 Besides, Wyatt has missed out on a perfect English summer, as she couldn’t be a part of the ongoing one-off Test against South Africa. The 31-year-old was a part of England’s World up campaign earlier this year and is yet to take the field since then. The English side ended up as the runner-up of the tournament. Wyatt will soon be in action against Proteas women in the white-ball fixtures.

The left-arm pacer Arjun was a part of the Mumbai Indians squad in the Indian Premier League (IPL), this year. MI had bought Arjun for INR 30 lakh, through the mega auction. However, the 22-year-old has not debuted yet for the franchise, despite its poor run across the tournament and the constant demand from the fans.

Arjun, in domestic cricket, has played a couple of T20s and has picked two wickets with an average of 33.50. He had made his domestic T20 debut for Mumbai,  against Haryana earlier this year, followed by a game against Puducherry.

Arjun is getting too dangerous to face- Danielle Wyatt

In an interview with cricket.com back in 2020, Wyatt had revealed that she met Sachin and Arjun, at Lord’s Cricket Ground, back in 2009, when Arjun was only 10 years old.

She had said: “So, I first met Sachin and Arjun at Lord’s Cricket Ground. Maybe 2009 or 2010 when I was with MCC young cricketers and they were training in the nets. Literally, I went to the nets and said hello and introduced myself saying I am Danni, etc. Arjun would have been 10 years old back then, he was so small. There is a photo somewhere on Google. I bowled to him that day, he was very good.”

Wyatt added: “Since then whenever I bump into Sachin or Arjun or whenever they come to Lord’s to train, I go to the nets and ask him (Arjun) to bowl the new ball to me. But he is getting very quick now. He always says I will bounce you and knock your head off so I don’t like him bowling to me anymore. He is getting too dangerous to face!”