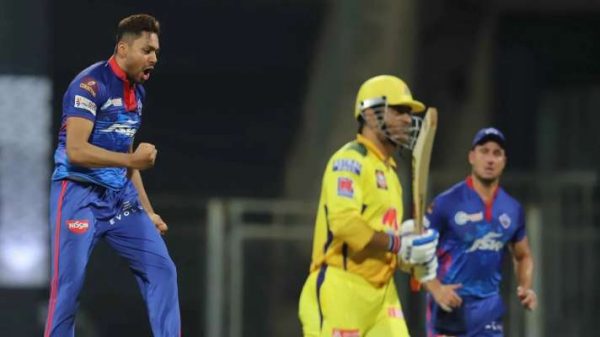 The young fast bowler from Delhi Capitals – Avesh Khan had a dream run in IPL 2021 before BCCI halted the tournament midway due to the COVID-19 surge. The Madhya Pradesh-born seamer turned the tables for Delhi picking big wickets like Virat Kohli and MS Dhoni.

Playing for the Delhi Capitals in the absence of Ishant Sharma, Kagiso Rabada, and Anrich Nortje, Avesh Khan made the most of his opportunities as he consistently put up impactful performances for his team. The young seamer changed his pace to brilliant effect to trouble some of the best in the business.

I enjoyed dismissing both Kohli and Dhoni – Avesh Khan

Avesh’s tally of wickets had the name of Virat Kohli and MS Dhoni in it, which the young pacer relishes the most. In a recent interview with Cricket Next, Avesh Khan opened up about his emotions after dismissing the two superstars of Indian cricket.

“Both are legends of Indian cricket. I enjoyed dismissing both of them. For a budding cricketer like me, they were joyous occasions,” said Avesh Khan.

Avesh Khan also revealed that he had a chat with Indian skipper Virat Kohli after his sides’ encounter with the Royal Challengers Bangalore in the recent IPL where the latter heaped praise on his performances and urged him to continue doing the same.

“I spoke with Kohli during IPL when DC played RCB. He told me that I bowled well and should continue doing this,” he added.

Avesh Khan claimed a total of 14 wickets in 8 games in  IPL 2021 and he was the joint-second highest wicket-taker before the tournament was suspended due to multiple Covid positive cases across four different franchises. He was rewarded for his efforts as the selectors included in the list of four standby cricketers for their three-month-long tour of the UK.