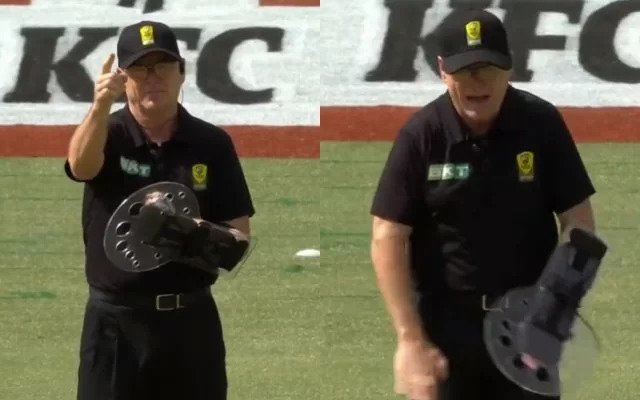 Renowned umpire Bruce Oxenford was seen goofing up with a decision during BBL 2021-22 game between Melbourne Stars and the Perth Scorchers. The incident took place during the 5th ball of the 14th over of the Perth Scorchers innings.

Perth Scorcher captain Ashton Turner attempted a pull shot off Xavier Crone. However, the ball hit his helmet and went through to the keeper. The Melbourne Stars’ players appealed, and the umpire, Bruce Oxenford initially raised the finger.

However, he quickly realized that the ball struck Turner’s helmet, and reversed his decision.

Xavier Crone had his first BBL wicket on debut – for all of three seconds! 👷‍♂️💥@KFCAustralia | #BBL11 pic.twitter.com/LDz2frhXOV

The Perth Scorchers have crushed the COVID-hit Melbourne Stars by 50 runs despite an early scare from their unlikely top-up players. However, forced into making seven changes for Sunday’s BBL game at Melbourne’s Junction Oval, the under-strength Stars performed better than many had expected.

Opting to bat, Perth Scorchers posted a mammoth total of 180 runs riding on Curtis Paterson and Colin Munro‘s 68 runs. However, they lost all the momentum in the second half of the first innings and seemed to be under a bit of pressure after a 78-run opening stand from the Stars’ openers.

However, the bowlers came to the party soon after that and kept picking wickets at regular intervals to leave the Stars gasping and eventually record a big win to get on top of the table again.

“It is a great accolade and really happy to contribute to team’s win. I got lot of support from my team mates and feels incredible and great to be in a team like that. Hopefully we can make the finals. I knew about a lot of inclusions coming into the game, I played grade cricket with them. It’s such a nice atmosphere and I trained here (at this venue) during my pre season.”