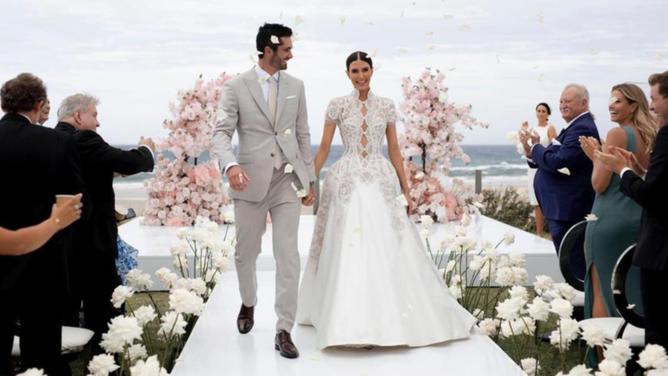 Ben Cutting tied the knot with his long-time girlfriend and cricket presenter Erin Holland. The couple in 2020 had to postpone their much-awaited marriage twice due to the Coronavirus scare. Finally, on Saturday afternoon the two took their wedding vows much to the happiness of their family and fans.

The two love birds were in a relationship for a very long time and would post adorable photos with each other on social media. Ben Cutting and Erin Holland got hitched in Byron Bay, New South Wales, at Elements of Byron’s Heart of the Bay. Cutting is a well-known all-rounder cricketer who has represented Australia in white-ball cricket as well as played for several T20 franchises all around the world.

On the other hand, Erin Holland is a familiar face too as she is a cricket presenter and has also been Miss World Australia. The couple got engaged a couple of years ago and they had also notified their fans on their respective social media handles.

Meanwhile, the wedding was a grand affair notable Singers Jess Dunbar and Matt Price who sang Justin Beiber’s Anyone at the wedding as Erin Holland walked down the aisle in her striking wedding attire. Erin Holland looked like a dream she wore three different J’Aton couture while Ben Cutting was dressed in Alex Goodman Custom.

“It has been a long journey to this point where we could safely have our friends and family under the one roof,” she was quoted as saying by Perth Now.

“I honestly felt like a princess, the dress was magical. It all came together at the last minute. We couldn’t do fittings in person so it was all done online,” Holland further stated.

Furthermore, the groom Ben Cutting was also extremely satisfied with how the wedding turned out in the presence of both their families.

“Our families are from all over so we had to reschedule a couple of times with borders opening and closing. Everyone was so accommodating and we are so grateful they all made the time, three times, to be with us for our wedding,” the cricketer said.