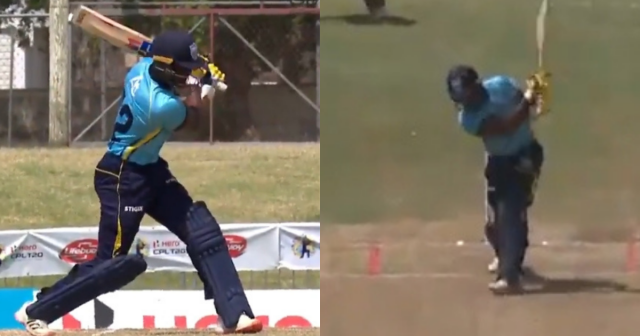 Andre Fletcher is a batting powerhouse, he possesses extremely good hard-hitting skills. This has led him to get a lot of success in the shorter format of the game. Whether it’s Caribbean Premier League (CPL) or Big Bash League (BBL) he has shined in both the events playing for Saint Lucia Kings and Melbourne Stars.

In the recent CPL game against Trinbago Knight Riders on Sunday Fletcher had a decent outing with the bat as he scored 28 runs off 25 deliveries including 3 maximums. Meanwhile, in the 5th over of the match, he went berserk against former Sri Lanka speedster Isuru Udana. As Andre Fletcher smashed him for back-to-back sixers. One of the six he hit was an awesome-looking no look six which fans and commentators certainly enjoyed a lot.

However, Andre Fletcher was unable to score big runs for the team as he got out against Akeal Hosein.

“Strange game of cricket, that’s why we love the game” – Faf Du Plessis after the CPL 2021 game

Meanwhile, in the end, Saint Lucia Kings won the match by a small margin of 5 runs. Tim Seifert smashed brilliant 16 balls 40 in death overs, however, was unable to save Knights from defeat.

“Strange game of cricket, that’s why we love the game. Keemo has been bowling well from that end, which is why I went for him in the 19th over. That’s what pressure does sometimes. Got me a bit nervous but we got across the line. The nature of this pitch is that you need to go deep. Need to scrap your way and then go big at the end, we did that,” Du Plessis said.

“I thought 150-plus on that pitch were about 15 runs too many. But can’t fault our bowlers much as they’ve been superb in the earlier games. Just need to find a way as the batting group. The dots don’t help, but getting out trying singles isn’t the answer either. We just need to find a way,” Pollard was quoted as saying.