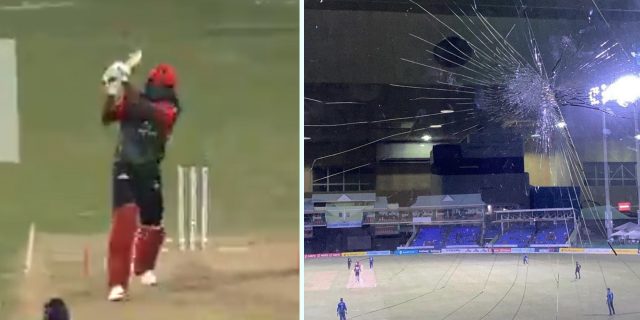 The Caribbean Premier League 2021 season kick-started on Thursday at Warner Park, Basseterre, St Kitts. St Kitts and Nevis Patriots took on the Barbados Royals and emerged as winners in the second match of the league.

St Kitts and Nevis Patriots batsman, Chris Gayle struck a humungous six which caught everyone’s attention. In the fifth over, he hit a straight six off Jason Holder which banged over the sightscreen and smashed the glass. Gayle scored 12 runs, including a boundary and six before he was dismissed by Oshane Thomas.

St Kitts and Nevis Patriots put on 175 runs on the board on the back of Sherfane Rutherford’s 53 and skipper Dwayne Bravo’s 47*. Fabian Allen also hit a brilliant cameo of 19 runs at the end. In reply, they restricted the Barbados Royals for 154 runs in 20 overs. Sheldon Cottrell and Dominic Drakes took two wickets each, while Fabian Allen took one and gave away only 12 runs in his three overs. St Kitts and Nevis Patriots won the match by 21 runs.

Skipper Dwayne Bravo praised the Player of the Match Sherfane Rutherford for his knock at the post-match presentation. He said,

“I was just trying to play the ball on merit with a clear mind. Once we bat deep, we know we can capitalize. I will give a lot of credit to Sherfane (Rutherford) for the way he batted. It’s the players, it’s the ability of the players to do well. He (Dominic Drakes) has the skills, he has the ability. I saw him in the nets. We know he is going to have a good future for West Indies.”