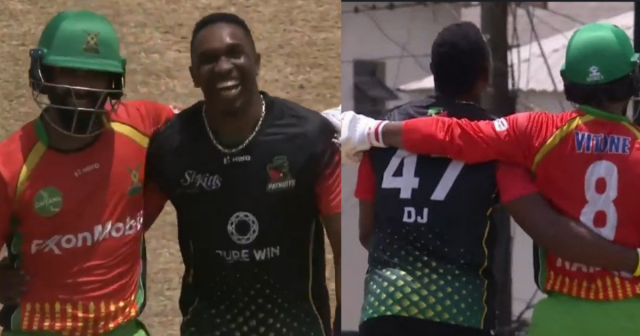 Caribbean Premier League (CPL) 2021 has been a thrilling tournament so far. In the first week itself, the tournament has had some amazing encounters between the teams. From Andre Russell’s fastest fifty in the history of CPL to Universe Boss Chris Gayle smashing a window glass. There have been several exciting moments. Meanwhile, now fans have witnessed a heartwarming moment between Dwayne Bravo and Mohammad Hafeez.

The heartwarming incident happened during the fifth match of CPL On Saturday. The match was between Guyana Amazon Warriors & St Kitts and Nevis Patriots. The star West Indies all-rounder Dwayne Bravo keeps winning the heart of fans with his performance on the field. However this time Bravo has done something else, as he showed amazing sportsmanship which left everyone in awe.

Guyana Amazon Warriors got the opportunity to bat first and they were at 134/8 in 19 overs. Star Pakistan cricketer Mohammad Hafeez was at unbeaten 28 on the non-striker’s end. Star West Indies all-rounder Dwayne Bravo came up to bowl the 20th over of the match and started with a wide delivery. Meanwhile, the second delivery he bowled was a dot delivery to Ashmead Nedd. Mohammad Hafeez was desperately waiting for his turn to bat so he left the crease before Dwyane Bravo released the ball from his hand. This gave Bravo a big opportunity to pick the wicket by dismissing Hafeez. However, Bravo decided not to Mankad Hafeez and he was seen laughing and hugging his counterpart. Fans enjoyed the moment as Bravo gave the warning in a style to Hafeez.

Dwayne Bravo found Mohammad Hafeez out of crease before the ball was released, but he didn't Mankad him. He also hugged Hafeez. pic.twitter.com/Jtvi3pHZ4D

Meanwhile, Mohammad Hafeez finally got the opportunity to bat against Bravo in the final over. And he went berserk after surviving the mankad. Hafeez smashed Bravo for back-to-back boundaries. The Pakistan cricketer ended his knock at the score of 38*. This led his team to put a decent score of 146/8 at the end of 20 overs.