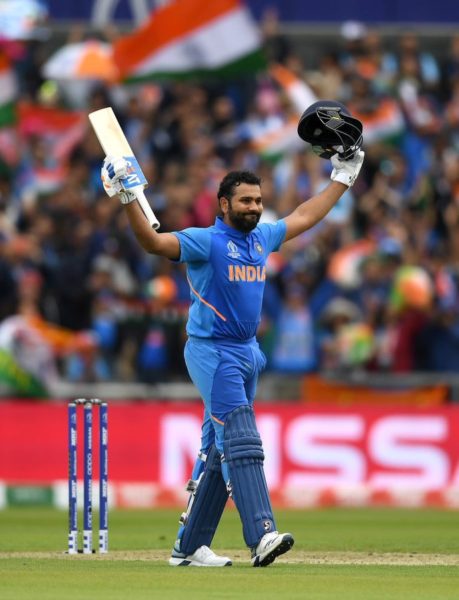 India posted a target of 337 for Pakistan in the much-awaited encounter at Manchester. The top order blitz helped the side to post such a total on the board and the focus now shifts towards the bowlers. Rohit, Kohli and Rahul had no mercy towards Pakistani bowlers and kept smashing them to nook and corners of the stadium.

Rohit Sharma”s prolific century paved way for putting up such a huge score on the board. His 140 runs included 14 boundaries and three huge sixes at an amazing strike rate of 124. Irrespective of pace or spin, his innings comprised a blend of destruction and composure and this played a vital role in setting up the huge target. In the process, he also broke the record for maximum sixes by an Indian player in International cricket.

Rohit Sharma”s 24th century is being appreciated by several cricket experts and analysts on social media. Fans are so ecstatic about this century as they could see a different dimension of Rohit after the cash-rich Indian Premier League. This century is his second one of the tournament and he is now the second (319) in the table for maximum runs just behind Aaron Finch (343 runs).

It is to be noted that India has been maintaining its victory streak against Pakistan in World Cups and its up to the bowlers to defend the streak.

These are few of the tweets that are trending for one of the impeccable innings by Rohit Sharma:

It’s amazing that we start visualising a Rohit double hundred the moment he goes past 100…we are not wrong to do that, are we? ??????#RohitSharma

Chatting to Rohit at ipl time ! Discussion about getting starts but not getting big runs , and I was like you don’t know what lies ahead of you it’s happening for a reason ! Same words told to me by @sachin_rt before 2011 wcup , my mos of 2019 prediction from india @ImRo45

Superb century from @ImRo45 !
Looks like it’s stage set for a big one. #INDvPAK pic.twitter.com/3I5t5FnbOO

The Hitman for big occasions!

Another big one, what a player @ImRo45! Put your foot on the accelerator even harder hit man!!! #cwc19 #INDvPAK

Brilliant ?under-pressure @ImRo45 big match big inning & congratulations to @imVkohli for achieving a milestone of fastest 11000 runs what a player you are unbelievable #IndiaVsPakistan #CWC2019

Fabulous Rohit !!! How fluent and pleasing to the eye was that hundred.#INDvPAK #CWC2019 Congratulations @ImRo45

Rohit Sharma deserves a biopic. Who should play him on screen? #IndiaVsPakistan

Privileged to watch one of the finest innings in a World Cup game from one of the nicest people I know . Take a bow @ImRo45 ? #Cwc19 pic.twitter.com/6ooVxZ0lss

Good first innings score from team India ?? in the high pressure game. Where the avg first inning winning score was 268. All thanks to @klrahul11 57 @ImRo45 140 & @imVkohli 77 nicely set up the game for India. Now it’s time for the bowlers to show their class. @BCCI #INDvsPAK

Brilliant ? from @ImRo45 but Pakistan have missed a trick by not opening up with Imad Wasim! ?‍♂️ #INDvPAK #CWC19

A top class 100 by @ImRo45 !! This will go down in history books as a commanding, authoritative performance by #RohitSharma ! In complete control of things in the middle. Elegance and Carnage in full flow. Another genius like performance ! #IndiaVsPakistan #indvPak #INDvsPAK

Brilliant knock by @ImRo45 and India looking solid at this stage at 200 odd for 1, all set for a minimum of 350 from here! Looking forward to the end overs from here. #IndiaVsPakistan #CWC19

Rohit Sharma deserves a biopic. Who should play him on screen? #IndiaVsPakistan