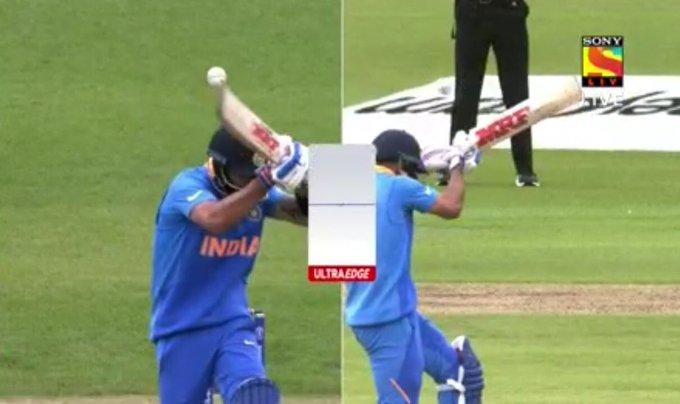 Indian side posted a massive score of 336/5 on the board. A solid top-order performance aided the side to put up such a huge score and the bowlers are currently involved in doing their duties to maintain the winning streak. If it was Rohit”s century in one side, the contribution from Indian skipper Virat Kohli shouldn”t be discounted.

A brisk 77 from the skipper ensured that the team is in the way to a high total. In the process, Kohli also became the fastest player to 11,000 runs in ODI format of the game in just 222 innings surpassing Sachin who took 276 innings for the feat. Kohli has always been hailed for his consistent performances over the decade. He is very next to Sachin for maximum centuries in limited overs and experts predict that he can break the record anytime.

Though Kohli posted required runs in the board, his dismissal turned out to be a controversial one. Amir”s head height bouncer was able to trouble Kohli which was caught behind by the skipper. However, the opposition wasn”t keen to appeal for this.

But to his beliefs, Kohli walked thinking that he has nicked it and left the crease. What”s interesting here is that the umpire wasn”t even keen on raising the finger. Ultra edge further confirmed that there weren”t any traces of ball touching the bat.

This act wasn”t received by the people in the social media and several tweets are trending on this issue on Twitter. It has been receiving mixed opinions and several people were disappointed by this particular incident.

On the other hand, Vijay Shankar took a wicket off his first delivery in ICC tournaments by dismissing Imam-Ul-Haq. Pakistan still needs 270 odd runs from 35 overs with nine wickets in hand.

Indian fans to Virat Kohli after seeing he was not out. #INDvPAK pic.twitter.com/VY0oIDGV3E

#ViratKohli
Walking out without waiting for the umpire's decision

BREAKING: @imVkohli finally encounters someone who can get him out – himself. pic.twitter.com/TXFFE3sVJC

Virat Kohli was not out. But why did he leave the ground before the decision given by the umpire #IndiaVsPakistan pic.twitter.com/c1PUqhkK09

He wasn’t out. He’s just too honest a guy. Great sportsmanship @imVkohli
Though it cost india 15 Runs but raised Indian head once again ?? pic.twitter.com/7m6uK0nzJs

#India audience to @imVkohli after seeing him walking out from ground #IndiaVsPakistan pic.twitter.com/Zo4VyvX52D

Indian fans to Virat Kohli after seeing he was not out. #INDvPAK pic.twitter.com/VY0oIDGV3E

KOHLI was NOT OUT !!

Why you walked out ? It was way above your reach !! @imVkohli #INDvPAK #RjAlok

What is up with @imVkohli sticking it out for almost the whole match ? #Fevicol ? ? Out ho jaaaaaoooo plzzzz ?