David Warner was replaced as the Sunrisers Hyderabad skipper after the side had just one win from their first seven games in IPL 2021. Kane Williamson was announced as the skipper and Warner was dropped the playing XI as well against Rajasthan Royals. As it turned out, Williamson’s first game as SRH skipper this season ended in a 55-run loss against the 2008 IPL champions. Meanwhile, David Warner’s brother was livid at the management’s decision to drop him from the playing XI.

David Warner was seen carrying out drinks for his teammates on the field and sitting outside the boundary rope, many symphathised with him. On the other hand, his brother Steve Warner didn’t hold back and slammed the SRH franchise for their treatment towards David after he has been such a successful player for the franchise.

He posted on Instagram, “A bloke that has carried this team for years, your openers aren’t the issue. How about getting a decent middle-order that scores some runs.” Here’s his latest post: 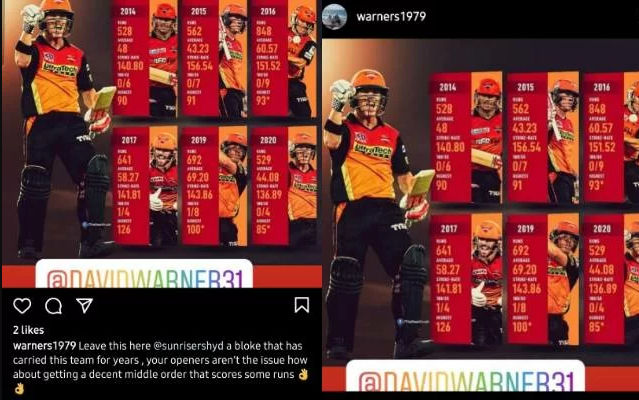 Tom Moody, SRH’s Director of Cricket Operations spoke about the management’s decision to drop Warner from the playing XI before the RR game. “Firstly he’s not going to be playing in this game and that’s purely a decision based on the combination. We’ve come to the conclusion that at this stage two overseas bat, an all-rounder and Rashid Khan is our best combination. We looked at it very closely. Obviously Bairstow’s form and Williamson’s form is at a great height and we are very thrilled with the way they are playing and we had to make a hard call and someone had to miss out and unfortunately for Davey (Warner) on this occasion, it’s him. He’s been pretty good” Moody said.

The Sunrisers were blown away by a Jos Butter classic in their latest loss. His 124 off 64 powered them to 220/3. A target of 221 was a bit too much for the SRH batting line-up especially with their weak middle-order and the absence of Warner from the line-up.