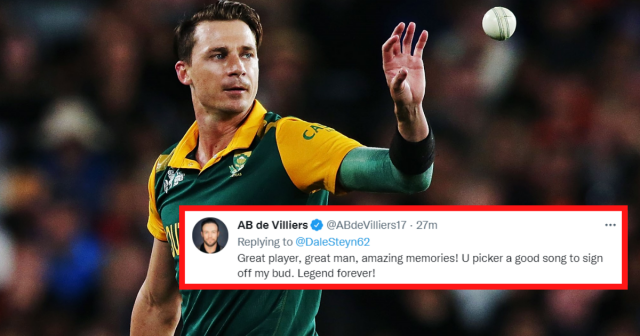 Dale Stey, the former South African pacer has announced his international retirement earlier today. having made his debut way back in 2004, his career spanned nearly two decades where he delivered several matchwinning performances. He made the officials announcement On Twitter earlier today.

“And its been a long December and there’s reason to believe. Maybe this year will be better than the last I can’t remember all the times I tried to tell myself to hold on to these moments as they pass,” Dale Steyn wrote in his retirement letter.

“It’s been 20 years of training, matches, travel, wins, losses, strapped feat, jet lag, joy, and brotherhood. There are too many memories to tell. To many faces to thank. So I left it to the experts to sum up, my favourite band, the Counting Crows.

Today I officially retire from the game I love the most. Bittersweet but grateful. Thank you to everyone, from family to teammates, journalists to fans, its been an incredible journey together,” he added.

Meanwhile, Twitter wished him good luck for his future endeavors and bid him goodbye with a heavy heart.

Go well, great man. You were fire, one of the best the game has seen.

You don't know what you got 'til it's gone 😢

Cricket and Fans will miss you GOAT 🐐 pic.twitter.com/ALWtxCxA84

End Of An Era 🐐 pic.twitter.com/6UjuBzCaty

The 🐐 then, now and forever.

Congratulations on a wonderful career and all the best with whatever comes next!

My favourite fast bowler. I based my action on yours. A treat to watch. Congratulations on an amazing career, and all the best for the future.

Congratulations on a fantastic career Dale, it was pleasure to see someone so dominating and terrifying for batsmen. ❤️

Steyn was at the top his game from 2008-2015 where he played across various nations and teams with the tye same intensity and competitiveness. He stayed as the number one Test bowler for over 2000 days in international cricket.

Over the years, his career was marred by countless injuries. Shoulder and ankle injuries were a constant throughout his career. However, he continues playing with those injuries.

Steyn played four -50 over World Cups and a few T20 World Cups as well. He was a part of the 2015 squad that made the played the semifinal against New Zealand.