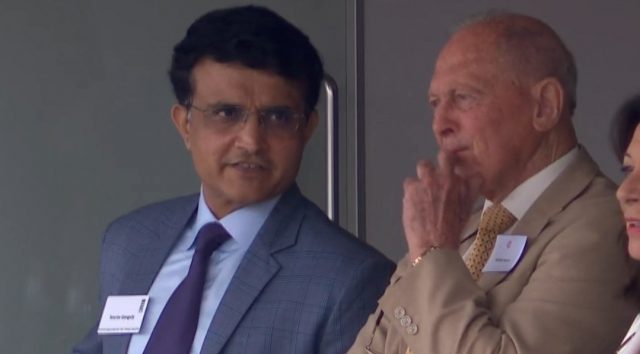 BCCI President Sourav Ganguly is currently in London. He was spotted on day one of the second Test at Lord’s talking to former commentator Geoffrey Boycott. Meanwhile, there are reports that Ganguly is in London with BCCI Secretary Jay Shah to discuss the future of Ravi Shastri. His coaching tenure comes to an end after the T20 World Cup in the UAE.

Shastri has also expressed the fact that he is not looking to continue after the event. The former Indian skipper turned coach won two Test series in Australia and beat England at home. The team reaching the ICC 2019 World Cup semi-final and the World Test Championship final, remains his top two achievements as coach of the Indian team.

He took over in 2017 after India lost the ICC Champions Trophy final against Pakistan. Meanwhile, a BCCI official said that Sourav Ganguly and his team will talk to Ravi Shastri during their stay in London and discuss on his future with the Indian team.

“Too early to talk about this, but as you are aware the president, secretary, treasurer, and vice-president are landing in London today. So they will interact with Shastri and the team and discuss various things around the tour and future of Indian cricket. If there is much to the topic of Shastri not looking to continue, it will surely be discussed over the course of the Lord’s Test. But I would still say too early,” the source said as reported by Insidesport.

Rahul Dravid is seen as one of the options who can take over from Shastri. Meanwhile, BCCI has opened applications for the NCA head role with Dravid likely to reapply for the post. He also said that he is not looking forward to a full-time coach’s role with the Indian team any sooner.

“I have enjoyed this experience. You know, look, I have not really thought anything far ahead. You know, to be honest with you I am happy doing what I am doing. For me, I haven’t given any other thought than this tour and getting through this tour” Dravid said at the virtual post-match press conference after the third and final T20I.