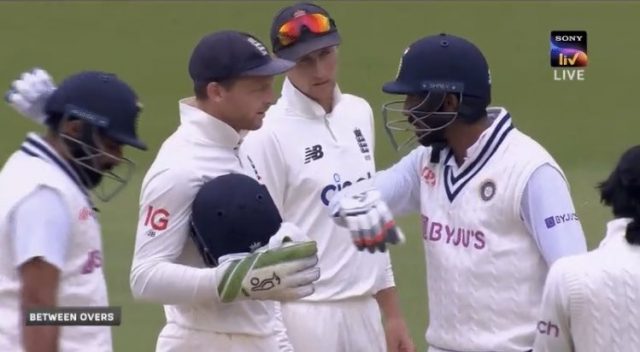 Jasprit Bumrah has been facing the heat ever since has walked out to bat at number five on day 5 of the Lord’s Test. The England bowlers have targeted at bowling bouncers ar him after he did bowl some to James Anderson while he was batting. Despite the heated on-field exchange, India have cross 200 runs with their lead and inching closer to adding as many as possible.

Meanwhile, after Jasprit Bumrah faced a few bouncers from the likes of Anderson, Wood and Robinson walked towards Jos Buttler. They both got involved in a heated exchange with Bumrah saying Buttler that he was not complaining against the England bowlers bowling bouncers at him.

Things are heating up in the middle as words were exchanged between Jasprit Bumrah & the English team.

India skipper Virat Kohli was seen defending his teammate from the stands at the Lord’s balcony. To vent out his anger, Bumrah also threw his bat at the bouncers and have been successful in doing so this far. The partnership between Bumrah and Mohammed Shami crossed 50 with the duo increasing the lead in the process as well.

India lost the wicket of Rishabh Pant early on day 5. Soon Ishant Sharma was also dismissed by Ollie Robinson. Since then the pace bowling duo have added together with a good stand and frustrated the England bowlers in the process.

The Lord’s Test has seen quite a few animated moments but nothing better than the Bumrah-Buttler banter, given that Bumrah is not at your face kind of cricketer.