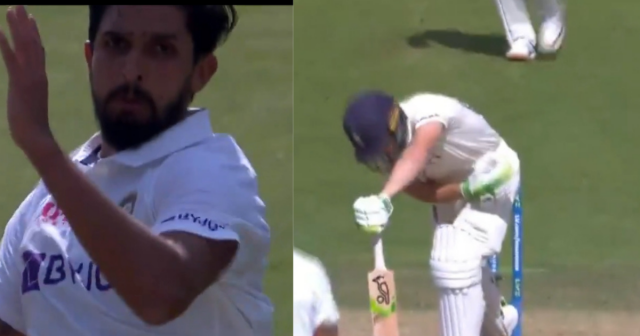 England batsmen did a very good job in the second Test against India at Lord’s after having a poor show in the first Test at Trent Bridge, Nottingham. However, Jos Buttler once again didn’t reach expectations. As Ishant Sharma clean bowled the English wicketkeeper-batsman with his exceptional delivery.

In the first innings at Trent Bridge, Nottingham Jos Buttler got out on duck. Meanwhile, in the second innings, he was dismissed on 17 after a bizarre misjudgment of delivery bowled by Shardul Thakur. Meanwhile in the second Test at Lord’s Buttler once again failed to meet the expectations of fans on the good batting surface. Although he looked good while batting, However Ishant Sharma came and sent Jos Buttler back to the pavilion.

In the last ball of 91st over of England’s inning, Buttler tried to play a drive on the deadly inswinger of Ishant Sharma. However, he completely missed the delivery and the ball went straight towards the stumps dismantling them.

Meanwhile, the England wicket-keeper would be disappointed after this outcome as he only managed to contribute 23 runs. Also, he was unable to support his captain Joe Root who is the main man of England’s batting unit. Notably, Joe Root once again scored a century against India at Lord’s in the second Test.

Ishant sneaks the ball past Buttler’s drive to knock the top of off stump.

Here is how Twitter reacted to Jos Buttler getting clean bowled by Ishant Sharma at Lord’s Test:

Beauty from Ishant, cleans up Jos Buttler for 23 and England trailing by 81 runs in the first innings with 5 wickets in hand. #ENGvIND

What a ripper that was by Ishant !
He really has given everything he had for that one. He rarely touches 140, whereas that delivery was 143 KMPH to clean up the top of off to dismiss Buttler. Important breakthrough, a partnership was building. #ENGvIND

Its not about getting out…even the greatest batsman can get out on oow scores… its the way some of the English batters are getting out… Jos Buttler has never convinced me a Test Batter…his mode and kind of Dismissals are really not worthy of a Test Batsman..

Buttler gone . What a lovely delivery by Ishant 🔥🔥 .

Also I have a working theory that some sort of soul transfer has taken place and now Jos Buttler has become Jonny Bairstow in tests and Bairstow has become Jos. It checks out don't worry

Why is Buttler in the Test team? 😒#ENGvIND

England Test captain continues to shine with the bat in the purest form of the game. Notably, Root scored a fifty and a hundred in the first Test against India at Trent Bridge, Nottingham. Meanwhile, in the second Test at Lord’s, he looked in great control and smashed a century in the first innings itself.

In 2021 Joe Root has been the only consistent batsman from England in the longest format of the game. The England captain has already crossed 1000 runs mark in Tests in 2021, other than him no batsman has 400 runs in Test. Also, Joe Root has become the second-highest run-scorer for England in Test cricket. Notably, he is just behind Sir Alastair Cook.