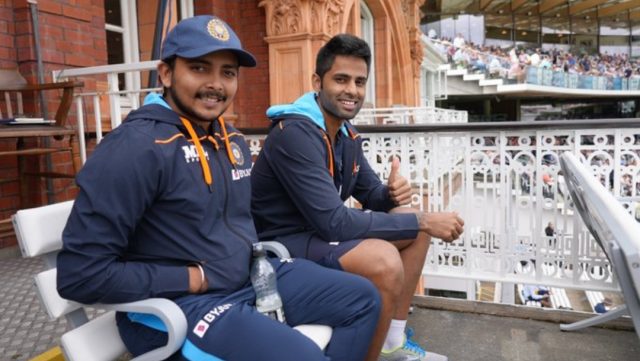 Prithvi Shaw and Suryakumar Yadav were two replacement India called up to England for the marquee 5 match Test series against England. Notably, the players finally reached England after facing a lot of difficulties, and are expected to be available for selection from the 3rd Test. Notably, they departed from Colombo to the UK on August 3 after completing Sri Lanka series. Also after reaching England they were sent for a mandatory 10-day quarantine.

The duo of Shaw and Surya was spotted at Lord’s watching the prolific battle between England and India. Notably, Prithvi Shaw was called as a replacement for injured Shubman Gill. Meanwhile, Surya was called after the injury of Washington Sundar. Also, India added middle-order batter Surya to the squad due to injury concerns of Rahane.

Although Rahane looked fit and played both the Test match against England. However, India’s Vice-captain didn’t deliver a good performance with the bat. BCCI shared the picture of Shaw and Surya watching the game at Lord’s.

Team England didn’t have a very great outing with the bat on Day 2 of the Lord’s Test against India. As when the day ended they were at 119/3 with captain Joe Root and Jonny Bairstow on the crease. Also, they were trailing by 245 runs. However on Day 3 captain Joe Root once again led from the front and scored a marvelous century.

In 2021 Joe Root has been the only consistent batsman from the England Test team. The England captain has already crossed 1000 runs mark in Tests in 2021, other than him no English batsman has 400 runs in Test.

In the first Test at Trent Bridge, Root smashed a brilliant 64 in the first innings and was the sole good performer from team England. Meanwhile, in the second innings, he scored an amazing century. Notably, he carried his form from Nottingham in the second Test at Lord’s and smashed a brilliant century. Fans on social media showered praise on Root for his great run in Test cricket.