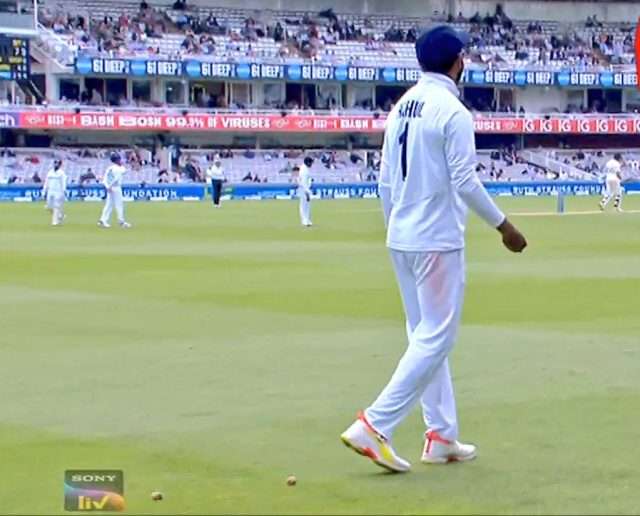 Unwanted scenes emerged at the iconic Lord’s Cricket Stadium as England fans threw some beer corks at Indian cricketers during day 3 of the 2nd Test. Meanwhile, the game is currently well-balanced with Joe Root and Jonny Bairstow looking set against the Indian bowlers.

The incident took place in the morning session of day 3 when Team India opener KL Rahul was fielding at the boundary ropes. A couple of beer corks were thrown at him. However, there are no confirmation whether it touched KL Rahul or not.

Rahul, who scored an outstanding century on the opening day of the 2nd Test was seen expressing his displeasure at the behaviour of the English crowds at Lord’s.

Coming out to bat at 119/3, England skipper Joe Root and Jonny Bairstow looked in complete control of the things. With the wicket not offering any assistance, Indian bowlers looked toothless apart from a few touch and go.

On top of it, the likes of Mohammed Shami and Mohammed Siraj were not consistent with their line and length which aided Root and Bairstow to keep the scoreboard ticking. Jasprit Bumrah came in and bowled an inspiring spell on either side of the drinks break but struggled to keep up the pressure.

Joe Root and Jonny Bairstow both reached their individual half-century as England went to lunch 216/3, adding 97 runs without losing any wickets. India will now have to produce an inspiring performance in the afternoon session to make a comeback in the Test match.