The India vs England 2021 series has finally started with the first Test underway in Chennai. They play India between February 5 to March 28 for four Tests, five T20Is, and three ODIs. Chennai will host the first two Tests. The final two Tests will be played at the newly built stadium in Ahmedabad. Ahmedabad will host the T20I series followed by Pune for the ODI series.

Meanwhile, the England openers were spotted wearing black armbands when they took the field to open the innings. Players from various teams sport the black armbands as a mark of respect whenever an eminent figure of their cricket fraternity passes away.

Similar is the case with England cricket who have lost former skipper Sir Tom Moore, who was an eminent figure in the history of their cricket. He lost his life after being affected by the pandemic aging 101 years old.

Earlier in the game, England won the toss and opted to bat first. Their openers Rory Burns (33) and Dom Sibley added 63 before R Ashwin dismissed the left-handed England opener who played a rash shot to get out.

Indian skipper Virat Kohli then brought back Jasprit Bumrah into the attack who dismissed Dan Lawrence to pick up his first Test wicket in India. From 63 for no loss, the visitors went into lunch at 63 for 2 as Indian bowlers brought them back into the game.

Root is the most experienced England batsman in an otherwise inexperienced batting line-up with six players playing their first Test match in India. 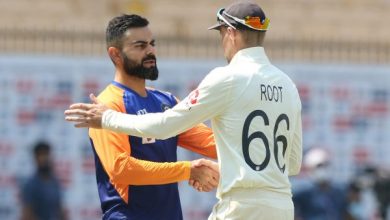