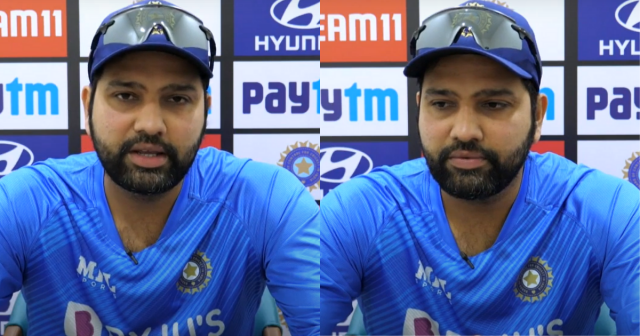 Last month, after India’s series defeat in South Africa, Virat Kohli had stepped down as Test captain. Now, senior batter Rohit Sharma is being considered as the top contender to replace Kohli as India’s next Test skipper. Rohit was asked about the same, ahead of IND vs WI ODi series, in a virtual press conference.

Rohit also said that the management is concentrating on workload management of all the players. He said that in the process of rotation of player between formats, the team might lose some matches, but the ultimate goal is to keep everyone fit for the upcoming world cups (2022 T20 World Cup and 2023 ODI World Cup).

“My focus is on limited-overs cricket. Workload management is important. We could lose a few series because we need to keep changing players, but we’re ready for that.”, Rohit added.

In the West Indies series, left-arm wrist spinner Kuldeep Yadav will also make a comeback in the side. He will reunite with his bowling partner Yuzvendra Chahal. Both of them used to be regular members of the Indian playing XI from 2017 to 2019.

While interacting with the media, Rohit revealed that he definitely is considering to play the ‘Kul-Cha’ pair in the XI. He also opined that Kuldeep Yadav, who has been away from the Indian squad for a long time, would require time to get his rhythm back.

“Kuldeep and Chahal have been great performers for us in the past and they have created an impact in those years whenever they have played together. They were left out because of the combination. It is certainly on my mind to get them back together. We want to get Kuldeep in slowly. We do not want him to be rushed.”, Rohit explained.

Meanwhile, the ODI series between India and West Indies will begin on February 6 at Ahmedabad’s Narendra Modi Stadium. Due to the rising COVID-19 cases in India, there will be no spectators allowed inside the stadium during the series.