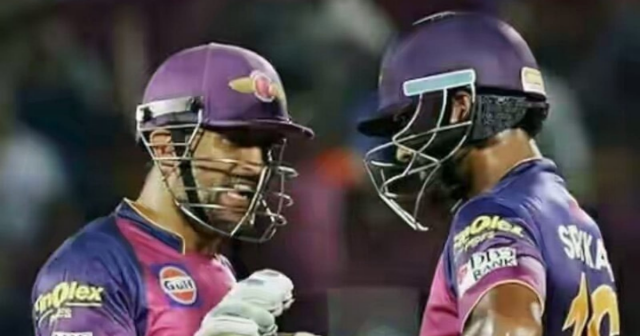 Sri Lankan all-rounder Thisara Perera has spoken about his time with the Rising Pune Supergiants in the Indian Premier League, where he played under the captaincy of MS Dhoni. Perera was a part of RPS in IPL 2016.

He recalled an incident from a match where the Pune team were struggling after losing five early wickets. When Perera walked in to bat, he started his innings with a conservative approach because the team was in trouble.

However, Dhoni from the non-striker’s end came up to him and said that he has been picked in RPS to bat freely and express himself.

“I remember a special incident with MS Dhoni for Rising Pune Supergiants, in 2016. In one of the matches, we were 35-5, and I came down to bat. MS was the non-striker.I defended my first ball and he comes to me knocking the pitch – ‘Hey, TP. What are you doing?’

“I said, ‘I am just watching the ball.’ The reply from him was very special, something which I didn’t expect with the sort of scorecard we were having at that time. ‘No, no. I picked you because you can hit the ball miles away. Go explode”, recalled Perera while speaking to News9.

Being able to play under your leadership has added a lot to my cricketing career . we will always miss you ‘Captain cool’ @msdhoni pic.twitter.com/9DkWr1TEU1

The trust shown by MS Dhoni gave Sri Lankan the confidence to go after the bowlers and play a quickfire knock for his team. Perera also highlighted how Dhoni in his typical style played till the 20th over and led the side to a great total.

“And from there on, I was just hitting every ball. I got around 18-ball 40 or something, which took the momentum away from the opposition. MS played until the 20th over and we scored around 170 or 180 from 35-5.”, said Perera.