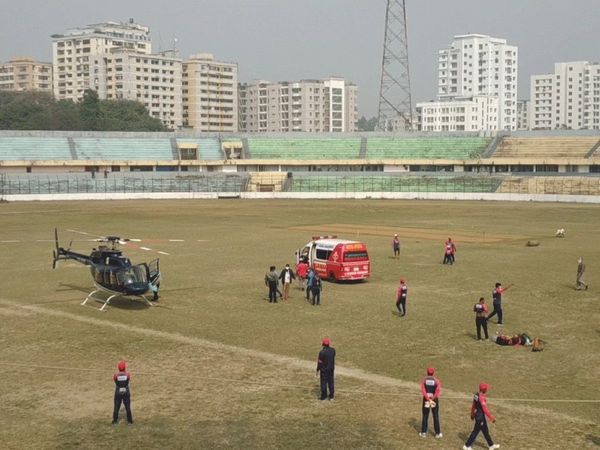 A bizarre incident took place in the ongoing Bangabandhu Bangladesh Premier League (BPL) when a helicopter suddenly landed in the middle of the stadium when the players of the Minister Group Dhaka team were practising; leaving them in shock.

According to reports, the incident took place on Sunday afternoon at the MA Aziz Stadium in Chattogram at 1:10 pm. At that time, a couple of players from the Minister Group Dhaka side including Andre Russell, Tamim Iqbal, Mashrafe bin Mortaza, Mohammad Shahzad were having a net session for their next BPL game.

A helicopter landed right in the middle of the MA Aziz Stadium in Chattogram without warning earlier today as cricketers were practicing for upcoming BPL matches causing the players to run for cover from dust #Cricket #BPL pic.twitter.com/jkUyCz5WyA

Later it was revealed that the helicopter was being used as an ambulance to airlift a critically ill patient. All the prior permissions were taken for the same from District Commissioner while the Sports Association too was informed. However, the BPL organisers had no idea about the developments which caused the panic.

General Secretary of DSA Shahabuddin Shamim revealed that the helicopter was asked to land in the empty space on the eastern side of the ground. However, the aircraft landed on the western side causing a little uproar. However, things calmed down immediately and players continued their training.

Meanwhile, Minister Group Dhaka are currently third in the points table with six points from as many games. Fortune Barishal are currently at the top of the BPL table with 8 points followed by Comilla Victorians, who have six from four matches.